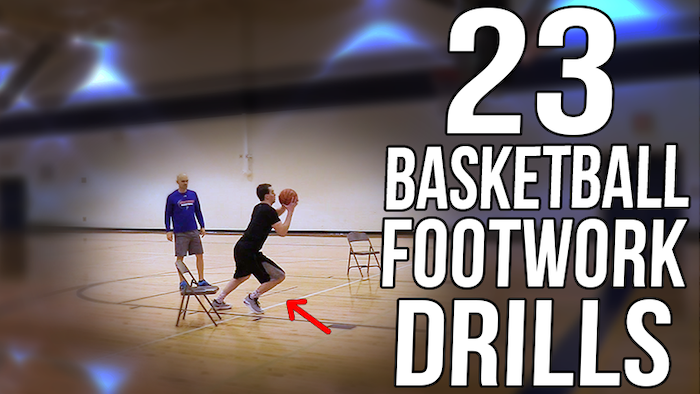 Footwork must have a purpose; if footwork is good in one area of the game, it’s good in all areas of the game. That means on offense, it can control and dictate a helpless defender and on defense creating indecision in the offensive player being guarded.

Proper footwork is essential in supporting a player’s overall performance on offense and defense. We have identified 4 keys to building proper footwork of beginners, intermediate to advanced players. While this is not THE list, it’s a list to support what we have discovered to work for our coaches that have supported Breakthrough Basketball over the last 10 years. Some may be tried and true concepts and others may be introduced for the first time to you. Either way, we will provide a brief description of each one to support your journey on helping players learn how to develop and master footwork for peak performances on the court.

The U-Stance puts you in ready position and is everything in basketball (most sports as a whole). The breakdown of the stance will unlock your players on becoming a threat on offense making plays to becoming a solid defender that stays in the right position playing on or off the basketball.

Wide base – Feet are shoulder width apart with heels up (stand on balls of the feet), hips dropped back straight, chin on the shoulders with head and eyes up for great court vision. This is what Jim Huber, Director of Coach Development and a Head Camp Director at Breakthrough Basketball, calls “Living Low”. A wide base will increase mobility in any direction on catching, cutting, making a dribble moves and shooting on offense. On defense, it’s the ability to play solid on and off the ball in an on ball-deny-help-recover sequence. Jumping awareness will be enhanced as well for contesting shots and grabbing rebounds. On offense, a wide base established in the post makes a player a tough guard. This position will help players move more fluidly on both sides of the ball.

Pictured above, both players are in the U-Stance and “Living Low”

Players use length to cover ground and become precise. As a result, they will become quicker at attacking the rim and playing solid defense.

Direction and speed changes directly tie into a player’s ability to use angles. Players become very active on both ends of the game with the understanding of angles is mastered.

The jump or hop stop is used at the end of dribbling, catching and receiving a pass, going into a finish or jump shot. On defense, it is used to close out and get into the base defensive positioning after moving.

All of the above breakdown supports the 1-2 Stop as well. This way of stopping is quicker and more explosive. Speed layups and pull up jump shots require a 1-2 Stop into finish or shooting positioning. An effective 1-2 Step is called “Stabbing of the Feet” as it supports a sharp stop and a quick lift off the ground into a shot.

Simply put, we teach 3 Pivots and 3 Counters. Why? That’s all you need. All of the greatest players to ever play the game had effortless pivot and counter moves and used them appropriately. Below are the moves

In conclusion, below, you'll find drills that are of value and will aid in your continued development process of building a solid foundation in footwork for your players. As a coach, by mastering and teaching the art of footwork, you can have a profound impact on a player’s feel for the game and make them a standout when on the court.

”Active feet won’t get you beat”!

Here are a few good practice drills to introduce jump stops and pivots to beginner youth players. We start with the jump stop, front pivot, and reverse pivot. Once players are competent with this basic footwork, we advanced to other concepts below.