How To: 2 UNSTOPPABLE Ways To Get Open For More Shots

If your players can create space from the defense and get open, it gives your team many more scoring opportunities.

Your players either get an open shot immediately off the catch.

If the initial shot is defended, your players have an advantage off the dribble because the defense will be in recovery mode.

If your players can't get open, your team's ability to shoot doesn't matter... neither does your offensive execution if you can't pass the ball. So this is a vital component to your team's success.

In this video, Don Kelbick demonstrates how to get open and two different cuts that you can utilize.


How To Get Open Every Time

As Don Kelbick says in the video...

Once you can control him, you can attack him.

Where do you go if you want to control the defense?"

The defender has to get closer to you. If they don't, you get a lay up.

You step towards the basket with your top foot, then you step through with your bottom foot.

Step 3 - Inside hip, inside shoulder.

You get your inside hip and your inside shoulder inside of the defense to get them on your backside.

2 Different Cuts To Get Open

As shown in the video, you can execute a V-cut or an L-cut.

With this cut, your path looks like the letter V. 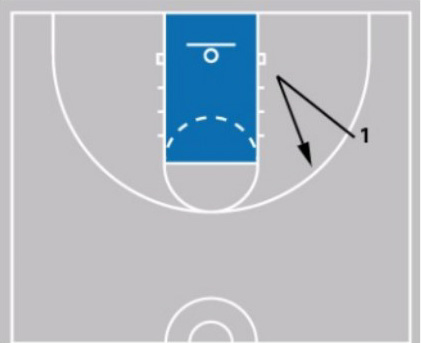 1. As shown in the video, you repeat the steps of taking your defender to the basket and getting them on your back (step through - inside hip, inside shoulder).

2. Once you gain position, you drive off your inside leg and step with your outside leg to cut to the wing.

3. You extend your outside hand extended for a passing target.

4. You pivot and look to score.

The path of the L-cut takes the form of the letter L. 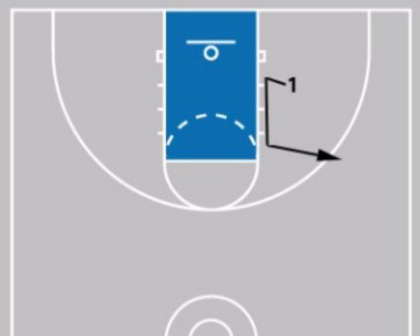 1. With the L-cut, you repeat the steps of taking your defender to the basket and getting them on your back (step through - inside hip, inside shoulder).

3. Then you stop and hold. You can vary the stop anywhere on the lane line from the low post to the high post.

This makes it very difficult for the defender to time your cut. You control when the cut is going to happen and the defender has to react to you. Thus, you have the advantage.

4. Next, you cut out and slightly up to the wing area.

You cut slightly up because it creates a better passing angle and makes it more difficult for the defender to deflect the pass.

5. As you cut, you provide a passing target with your outside hand and outside foot for a target.

6. You execute an inside pivot (reverse or back pivot) and look to score.


If the defender overplays either cut, you can always cut backdoor and clear out.

3 Drill Progressions To Practice Getting Open

Here are three drill progressions that you can use to improve getting open and scoring from this position.

You can use the drill in the video to improve the footwork and shooting from this situation. 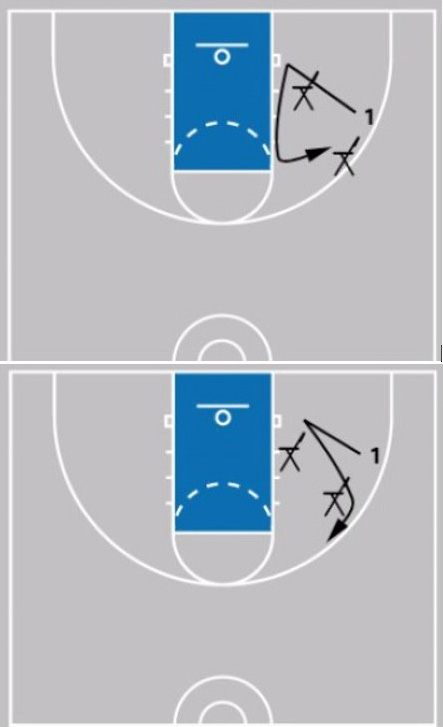 1. Player cuts to the first chair. Player executes step through and imagines getting the defender on the inside hip and inside shoulder.

2. Next, the player cuts to the second chair, turns, and shoots. You can designate which cut to practice.


When To Use Chairs Or Passers In The Drill:

You can use chairs or a passer if they are capable of making good passes.

Personally, I prefer to use chairs when first teaching the skill. As Don says, I don't like bad passers to screw up the skill development practice, especially at the initial learning phase.

When players get accustomed to the footwork, I introduce passing.

However, if you're in a small group of 2 or 3 players, you could pass from the beginning.

Next, you can incorporate some decision-making.

You can also teach your teams to only pass the ball when the offense lifts a hand as a passing target. That way, turnovers from miscommunication are reduced.

1. A passer is on top with a defender guarding them. The passer cannot dribble to start the drill.

Like above, you can do shot clocks, dribble limitations, offensive rules, and time limits to get open.

For this situation, you can also do passing limits. That way, players learn how to immediately attack a situation.

You can also do something similar with 3v3, 4v4, and 5v5 where the player with the ball has to pass to initiate the offense.

This video clip is from Don Kelbick's Attack & Counter Skill Development System. This is a great resource for individual skill development.

For team-oriented offense development, you can look at Don Kelbick's Motion Offense Videos.