Simplify Your Drills, Simplify
Your Skills, or What?

On a recent article about my experience coaching a couple of Loyola Chicago players in high school, here is a question I received.

Great article Joe. Hope you are still enjoying your vacation! What I take from that article is the simplification of the drills. While I certainly understand the need to promote Breakthrough Basketball and enjoy the content, I almost feel like the amount of info that comes makes it extremely difficult to simplify and focus on a few key drills. Would love to see a follow up article or just a direct reply to my email on what drills you simplified for them. I have a 7th grade son and would love to give him some basic drills going into the Summer. Thanks again and keep up the great work!

Rather than simplifying drills, while this may be necessary, I would say it's more about simplifying what skills that you practice. You want to focus on the most important skill sets that you do the most during the games.

Don Kelbick wrote a good piece about this What Are Your Big Rocks?.

This article also shows you what to focus on.
Klay's Superhuman Night and A Surprising 19% NBA Study

How To Develop Your 1v1 Offensive Skills

Here is an overview of what I like to do when working on 1v1 offensive skills.

1a - Develop consistent and repeatable shooting technique that enables the players to shoot the ball with proper arc and consistently straight.

Rick Penny's One Motion Shooting is very close to what I like to teach.

1b - Teach the Attack & Counter Skill Development System. Don Kelbick is one of the best at simplifying the potentially complex subject on individual skill development.

1c - Apply individual offense skills in 1v1 environments. You can find a bunch of these examples on our website or in 30 Competitive Skill Building Drills.

2a - Incorporate random practice. This is partially covered with 1v1 drills. However, you can learn more ways to do this via Basketball Decision Training (BDT) by Chris Oliver.

2b - Teach a couple of advanced finishing moves that fits the player's strengths.

Jim Huber's Next Level Finishing Moves is a great resource for this.

What Drills Should You Use?

Here is my viewpoint on drills.

Drills are just medium for improving your skill set. So first, set your objective. Then use drills that you think best achieve that.

At the same time, you need to keep your players engaged and challenge them appropriately, so they continuously improve. You want to keep them in the "sweet spot".

Jeff Haefner wrote this in an article...

Part of our philosophy is to keep players in the sweet spot of development. In other words, we want to challenge them but not challenge them too much.

If it's too easy, players get complacent and do not improve as much as they could. If it's too hard, they can lose confidence and enthusiasm.

The concept of the sweet spot is discussed in The Talent Code by Daniel Coyle and the 21st Century Basketball Practice by Brian McCormick: 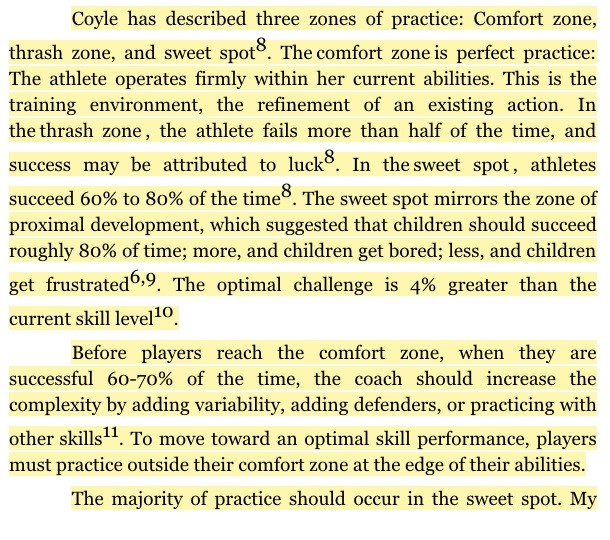 One way to accomplish this is to simply have regressions and progressions. Even though the drill appears to be the same, simply changing the focus is enough to keep the player engaged.

For example, let's say you're working on footwork. You're working on a basic front pivot to face the basket like in the drill below. As you may have noticed, if you try to teach all aspects of doing this effectively, the kid will look more like Mr. Roboto rather than a fluid and athletic basketball player. I've been guilty of this in the past.

So the first day, you just focus on pivoting on the correct foot and in the correct direction. They'll screw up. They'll travel. But that's day one.

Next, maybe they're sliding the foot too much and traveling. So you focus on keeping that pivot foot in the same spot.

Next, you tell them to keep their hips slightly down through the pivot. "Hips down"

Next, you might focus on speeding up the pivot. That way, a player can transition to face the basket quicker. Thus, shooting the ball quicker.

Then you might put a bigger emphasis on cutting harder and faster prior to catching the ball to pivot.

Depending on the age level and skill level, this progression could take days or it could take years.

This goes hand in hand with the small incremental improvements by using the same drill that I mentioned in the Loyola Chicago article.

Let's take this 1v1 drill as an example.

You could change positions on the floor. You could start in the corner, top of the key, elbow, near half court, etc.

You could add a second defender that starts from the opposite block to simulate help defense. You could add and make it 2v2 and 3v3.


When and When Not To Change The Drill

And other times, it's just changing the drill to keep players engaged to work on the same skill set. Hence, all of the drills that you see in the newsletter.

With experience, you eventually figure out what works best for you and hopefully what's best for your players.