Successfully used by 60,000+ players from youth to college levels

If you've ever lost sleep thinking about close games you should have won - if only you'd made a few more layups - this letter will be a turning point for your upcoming season.

Because if you use the training info I'm about to share, you can:

It transforms players' abilities at EVERY age and skill level...

And even if they currently lack the size, strength or mentality to take it to the rack with confidence.

Quite simply, they're too predictable.

So many kids only have one finishing move at the rim...

And they can block the shot, strip the ball or easily stay in position to alter the shot.

The results are even worse if your kids can only finish with their strong hand or go in one direction.

Even great players would struggle to finish consistently if they were only ever allowed to use one move.

So the key is first teaching the foundational pieces like:

Then teaching them a wider range of moves they can deploy against any defensive look.

The tried-and-true "Jump off the inside leg and finish with the outside hand" only works in a few situations...

Each situation requires its own unique finishing move or combination to convert at the basket.

Yet in 40+ combined years on the sideline, we've found "Finishing" to be one of the least understood and under-taught skills.

Players are often left to "figure it out" through trial-and-error or modeling college and pro players.

Even though the proper training can...

How many layups do you estimate your team takes and makes per game?

Take 25 and make 10? Obviously this varies widely based on age.

But let's say you utilize training that increases converted layups to 13 per game.

That's 6 more points on the board. Plus several more fouls drawn and free throws.

And that's before you think about the ripple effects:

It's very realistic to say you could score 8-15 PPG more if your players finished with precision.

How many of your losses last season were by 15 points or less?

This really is one of the small levers that can swing a very big door.

Here are a few coaches who've watched this come to life:

"Several of our players are making 2-4 more layups and getting 1-3 more steals per game because they use (this move) and know how to defend other players who do not."
- Coach Ingersoll

"Our players are now winning close games that we used to lose by using these moves to score and draw fouls in the final minutes."
-Coach Malloy

"A 7th grade girl with the top AAU team in our state made 4 buckets by using this college level move. Her team beat our team by 8 points."
- Coach McCullough

Stop Worrying About the Refs... And Start Finishing With a Purpose

One of the greatest gifts coaches can give players is the wisdom to focus on what they can control and forget about the rest.

None of us can control when the ref blows their whistle.

Yet it's so common for players to go up weakly, hope the ref bails them out and complain when it doesn't happen.

That's NOT winning basketball...or a winning mentality in life.

Instead, we can help our kids take control by mastering finishing moves that: 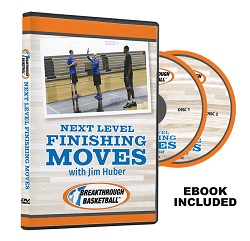 The Next Level Finishing Moves training program is an easy step-by-step system for players to learn and apply elite level finishing moves to score more points, foul out the best defenders, and win more games.

Every strategy and move has been tested and perfected with over 60,000 players over the last 5 years.

Take action with confidence this will transform your game and your team.

Who is this program for?

Next Level Finishing Moves is for any player or coach who wants to:

The principles apply to all players from youth to college level - and include applicable training for all positions.

The drill progressions are designed to appropriately challenge players no matter where they're starting out.


Here's what real coaches think about Next Level Finishing:


I purchased these disks to get another perspective on how to teach finishing moves and look for some new ways to teach some of these skills. We often teach many of these moves at our camps. Jim Huber does a great job of explaining how to run the drills. In some areas, he uses some different terminology than we do when we teach these skills at our camps. I like his approach and it has helped me to re-think how I teach and ways I can communicate more effectively with our players.


The BTB videos are far above and beyond other basketball videos by other publications. Their clarity and detail are excellent. The information is well thought out. I appreciate the fact they are not the ship shod Clinic videos so often seen today. As a long time coach of the game I highly recommend this video and the many others I have purchased. BTB takes the time to make sure their videos are the highest of quality and content. Anyone interested in good explanations of how to teach finishing moves should invest in Jim Huber's Finishing Moves video. You likely won't use them all but there is something there for everybody. Love the teaching!


I have several videos from BTB and the "Next Level-Finishing Moves" is another great tool I use to build and adjust my coaching methods. We see great moves as we watch college and NBA games but the fine points to teaching them, to athletes ranging from 10 to 18 years requires an excellent video this. Jim Huber has several videos, all a must for the serious coaches library.

Get Instant Access to Next Level Finishing Moves for Just $69

This is the big picture. Similar to when you teach players moves and plays, you too need the Big Picture of how this system works to use it effectively. It's quick and easy but necessary.

You'll also get to meet the lead instructor, Jim Huber, who is one of the top youth basketball curriculum developers in the USA. 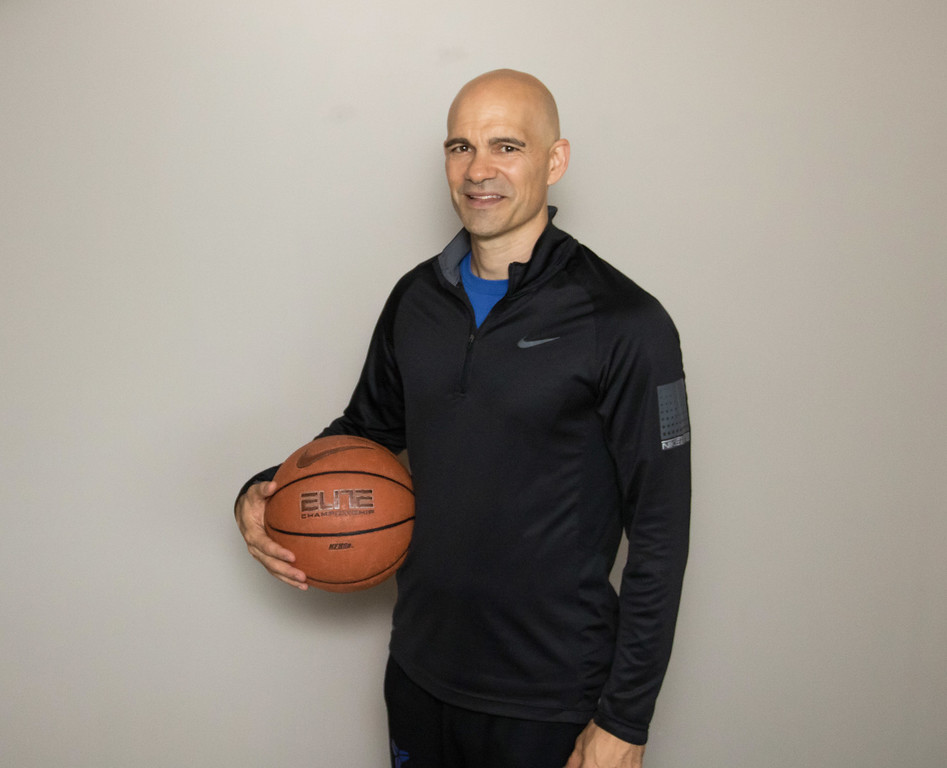 Chapter 2: Finishing Moves - 20 of Them with Twists

In this second chapter, you will learn how to teach all 20 elite finishing moves.

Here is a sample of a few of the moves...

NOTE: Comments are from people who have either used these videos or seen these moves taught at one of our camps.

"Several of our players are making 2-4 more layups and getting 1-3 more steals per game because they use this move and know how to defend other players who do not."

This is the move that leaves even elite defenders who are ready to block shots into the stands wondering what just happened. The craftiness of this move is NBA-worthy.

"I had never thought about how when my players drive, defenders time their shot blocks to their footwork. It's counter-intuitive, but my best players figured out quickly that this could make them a half-second faster."

The stretch finish is the key to getting separation from aggressive defenders by making players more unpredictable through changing the takeoff point, timing and release point.

"My players all wish they were taller so I asked them if they could, 'grow 5 to 10 inches in an hour,' and then showed them by using this move. Combined with longer steps in the lane this gets them to the hoop a lot faster too."

This brilliant inside hand fake followed by a pivot into a second move makes the biggest, most aggressive defenders look like 7 year olds. It's the kind of offensive move that results in scores and pumps the bench and audience up which can change momentum of games.

"I save teaching the Rondo for when my kids get bored with reps of easier moves. They love it because it looks so cool."

The Eurostep is well known and taught to avoid the charge. The little known "invasion step" taught in this video is used by top scorers to blow by even the tallest and quickest defenders while drawing fouls.

"I've seen Russell Westbrook do this but set it up with a pass fake to move the help side defender. It's pretty unstoppable when done with these variations."

This high level move relies on ball security and contact timing with a long drop step to the basket while properly pulling the ball with the same hand.

"Our guards finally learned how to do a spin move correctly in the open court and are really excited that it is now leading into a shot finish."

These are simple drills that give players a lot of reps but also a lot of creativity in choosing which finishing moves are the best ones for them to perfect.

This chapter demonstrates how to isolate a specific action in your offense to create useful drills to practice finishing moves as they occur in games.

"I loved this section because it put everything our players learned into live action. It taught the when and how to use these in games. We could see their level of skill going up immediately."

As you probably already know, competitive 1v1 drills are probably the best way for kids to focus on doing moves correctly while mimicking game-like defensive pressure.

These drills have been used with thousands of players at Breakthrough Basketball camps and can immediately improve players' confidence and skill levels.

This chapter provides answers to a few of the most frequently asked questions so you can coach with confidence and clarity in this approach.

Next Level Finishing Moves is backed by our 60-day unconditional money back guarantee.

If you don't feel like this will transform your team's practices and game performance, just email me for a full refund.

No questions asked. No hassle. No worries.

We're so confident this program will transform your finishing skills that we're willing to take all the risk, so you don't have to.

From there, simply click "Proceed to Checkout" and you'll be taken to our 100% Secure Payment page.

Just enter your contact and billing information to complete your purchase, and we'll email you all access instructions within a few minutes so you can dig into the trainings!

Load Your Team With Fearless Finishers

You already know all the ways better finishing skills can transform your team this season:

And you've heard from coaches who have watched players transform in front of their own eyes thanks to this training.

If you want to prepare your players to finish fearlessly against taller, stronger defenders...

In any situation - and whether or not they get the call...

Then grab your copy of Next Level Finishing now. 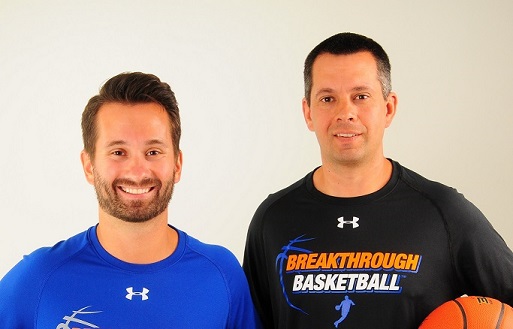