The rules of basketball, thankfully, are fairly straightforward.

However, if you’re coaching younger players, these rules can be easily forgotten once they take the floor.

The three-second rule (which we’ll discuss later in this article) is just one of many great examples.

But before you can teach the rules to your team, you must know them yourself.

So keep reading, because by the end of this article, you’ll be up to speed on all the basketball rules so you can teach your players and help them develop throughout the season!

Basketball is a team sport.

Two teams of five players each try to score by shooting a ball through a hoop elevated 10 feet above the ground.

The game is played on a rectangular floor called the court, and there is a hoop at each end.

The court is divided into two main sections by the mid-court line.

If it doesn't, then the defense gets the ball.

Once the offensive team gets the ball over the mid-court line, it can no longer have possession of the ball in the area behind the midcourt line.

If it does, the defense is awarded the ball.

When a team makes a basket, they score two points and the ball goes to the other team.

If a basket, or field goal, is made outside of the three-point arc, then that basket is worth three points. A free throw is worth one point.

Free throws are awarded to a team according to some formats involving the number of fouls committed in a half and/or the type of foul committed.

Fouling a shooter always results in two or three free throws being awarded the shooter, depending upon where he was when he shot. If he was beyond the three-point line, then he gets three shots.

Other types of fouls do not result in free throws being awarded until a certain number have accumulated during a half (called “team fouls”).

Once that number is reached, then the player who was fouled is awarded a '1-and-1' opportunity. If he makes his first free throw, he gets to attempt a second. If he misses the first shot, the ball is live on the rebound.

Each game is divided into sections, and all levels have two halves.

In college, each half is twenty minutes long.

In high school and below, the halves are divided into eight (and sometimes, six) minute quarters. In the pros, quarters are twelve minutes long.

There is a gap of several minutes between halves. Gaps between quarters are relatively short.

If the score is tied at the end of regulation, then overtime periods of various lengths are played until a winner emerges.

Also, each team is assigned a basket or goal to defend.

This means that the other basket is their scoring basket.

At halftime, the teams switch goals.

The game begins with one player from either team at center court.

A referee will toss the ball up between the two. The player that gets his hands on the ball will tip it to a teammate. This is called a tip-off.

(NOTE: Looking for a simple plan you can follow with your youth team? Or just some additional drills and plays to keep your players engaged and set them up for success? Check out our FREE 72 Winning Youth Drills and Plays eBooks to help your players develop AND have fun doing it.) 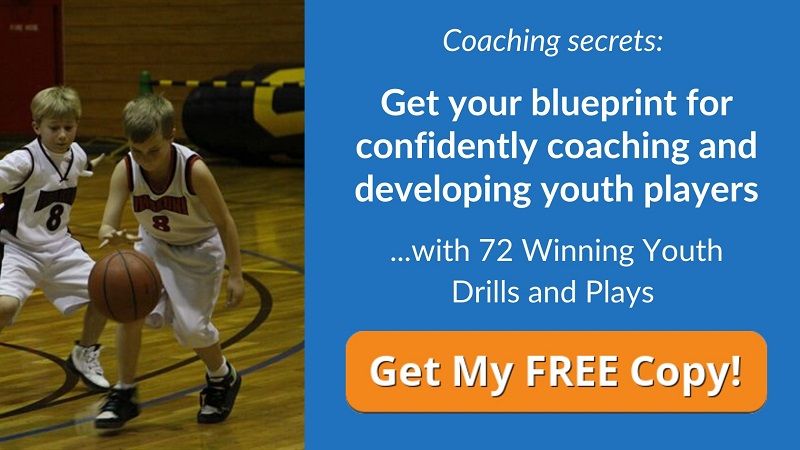 In addition to stealing the ball from an opposing player, there are other ways for a team to get the ball.

One such way is if the other team commits a foul or violation.

Charging. An offensive foul that is committed when a player pushes or runs over a defensive player. The ball is given to the team that the foul was committed upon.

Blocking. Blocking is illegal personal contact resulting from a defender not establishing position in time to prevent an opponent's drive to the basket.

Flagrant foul. Violent contact with an opponent. This includes hitting, kicking, and punching. This type of foul results in free throws plus the offense retaining possession of the ball after the free throws.

Intentional foul. When a player makes physical contact with another player with no reasonable effort to steal the ball. It is a judgment call for the officials.

Technical foul. Technical foul. A player or a coach can commit this type of foul. It does not involve player contact or the ball but is instead about the 'manners' of the game. Foul language, obscenity, obscene gestures, and even arguing can be considered a technical foul, as can technical details regarding filling in the scorebook improperly or dunking during warm-ups.

Carrying/palming. When a player dribbles the ball with his hand too far to the side of or, sometimes, even under the ball.

Double Dribble. Dribbling the ball with both hands on the ball at the same time or picking up the dribble and then dribbling again is a double dribble.

Held ball. Occasionally, two or more opposing players will gain possession of the ball at the same time. In order to avoid a prolonged and/or violent tussle, the referee stops the action and awards the ball to one team or the other on a rotating basis.

Backcourt violation. Once the offense has brought the ball across the mid-court line, they cannot go back across the line during possession. If they do, the ball is awarded to the other team to pass inbounds.

Time restrictions. A player passing the ball inbounds has five seconds to pass the ball. If he does not, then the ball is awarded to the other team. Other time restrictions include the rule that a player cannot have the ball for more than five seconds when being closely guarded and, in some states and levels, shot-clock restrictions requiring a team to attempt a shot within a given time frame.

Center. Centers are generally your tallest players. They generally are positioned near the basket.

Offensive -- The center's goal is to get open for a pass and to shoot. They are also responsible for blocking defenders, known as picking or screening, to open other players up for driving to the basket for a goal. Centers are expected to get some offensive rebounds and put-backs.

Defensive -- On defense, the center's main responsibility is to keep opponents from shooting by blocking shots and passes in the key area. They also are expected to get a lot of rebounds because they're taller.

Forward. Your next tallest players will most likely be your forwards. While a forward may be called upon to play under the hoop, they may also be required to operate in the wings and corner areas.

Offensive -- Forwards are responsible to get free for a pass, take outside shots, drive for goals, and rebound.

Defensive -- Responsibilities include preventing drives to the goal and rebounding.

Guard. These are potentially your shortest players and they should be really good at dribbling fast, seeing the court, and passing. It is their job to bring the ball down the court and set up offensive plays.

Offensive -- Dribbling, passing, and setting up offensive plays are a guard's main responsibilities. They also need to be able to drive to the basket and to shoot from the perimeter.

Defensive -- On defense, a guard is responsible for stealing passes, contesting shots, preventing drives to the hoop, and for boxing out.

Where Should New Coaches Start?

Now that you understand the fundamentals, the smartest plan you can follow from here is to help players develop those skills with structured drills and practices.

Our FREE 72 Winning Youth Drills and Plays resource is designed for coaches like you, to help in:

It even includes diagrams and step-by-step instructions so you can help your players develop AND have fun doing it...

Even if you have little or no basketball (or coaching) experience.

Click the link below, and we’ll send you a copy right away (along with a Special "skill development" Bonus for your players).

Get My FREE Drills and Plays, plus a Special Bonus.

To your basketball success!

P.S. Here are a few additional resources to help you master basketball fundamentals:

These are all critical fundamentals to master because they'll make you and your team better, no matter what age level or situation you might be in.