Few positions on the basketball court are as pivotal to a basketball team as the post player. A player at any position can have impact, but no other position can change the game like a post player. Many of the rules we play by today are the result of post play. The foul lane was widened from 6 feet to 12 feet due to the play of Bill Russell. The rule that the ball cannot pass over the backboard came about as a reaction to Wilt Chamberlain. The no dunk rule (now in effect only in warm-ups) was a result of the dominating presence of Lew Alcindor (no Kareem Abdul-Jabbar). 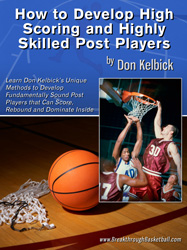 The Miami Heat went from out of the playoffs to NBA Champs and the L. A. Lakers went the other way with the trading of Shaquille O'Neal. Bill Russell anchored the most dominating dynasty in NBA history, the Boston Celtics of the late 1950's and 1960's. A dynasty that started with his arrival and ended with his departure.

A post player has to be something other than tall. Many tall players should not be in the post (Kevin Garnett). By the same token, a post player does not have to be tall (Zach Randolph). A post player is a player who is comfortable playing with his back to the basket. He is not afraid of contact and will come back play after play despite getting hit even when he doesn't have the ball. A post player is willing to go to the boards on every play and if he can't get the rebound, makes sure that his man won't.

Because of these unique abilities, post players must be evaluated on their teams a little differently than other players. I have heard things like, "The only thing Shaq has is size. He can't dribble or shoot outside of 5 feet," and "Matumbo is so tall but with his offensive skills he wouldn't even make a HS team if he were 6-6." The fact is Matumbo is 7-3 and Shaq is a giant. They bring different things to the table that smaller players can't bring. With his shot blocking and rebounding ability, Mutumbo must save 15-20 points per game over his career. And if Shaq were on your team, would you even WANT him to dribble or shoot from 15 feet. Think about what they bring to the game and then evaluate them.

A lot of effective post play is instinctual. It is difficult to play with your back to the basket. It takes a feel and a comfort level that comes from hours and hours on the court. We can teach the skills but we cannot force our players to be comfortable. I think too many coaches make the mistake of taking players and just throwing them on the block and then complaining when the player can't adapt. I have always believed in finding out which players are comfortable down there and then deciding who is the post player. It may not be the tallest player but it will be the ones that are most comfortable playing down low.

Once you identify who your post players will be, what do you do next? What do you teach him to make him better?

Without question, I believe the most important and the most under-taught skill is footwork. One common thing that all great post players have is great footwork. Look at the greatest post players in history. They may have different games, Shaq (power), Olajuwan (speed), Kareem (finesse), but they all have great footwork.

Players should be equally adept at performing pivots on either foot.

I have learned to teach offensive moves based on pivots (Right foot, inside pivot, jump shot) rather than names ("Sikma Shot"). This allows the player to use his imagination when creating his game. In addition, the footwork is common to performing other skills on the floor. We teach our players to "Sikma" inside, "Step Out" on the perimeter and "Reverse Pivot" to box out, the player has to learn 3 things. In reality, all three post moves are "inside pivots" and presented as such, it is much easier for the players to learn and they are more confident in performing them.

Just like pivots, there are only a certain number of shots you can shoot. Combine them with different pivots, or combination of pivots, you come up with an array of offensive post moves.

The shots I believe post players should have are:

Players should be equally adept at each shot with either hand.

Common names for common moves are very important teaching tools. Using pivots and shots also allows you to use the same language for all your players, regardless of position.

A counter is a pivot that is used when your initial pivot or shot is defended. It should flow smoothly from the initial move into the counter. Because of his proximity to the basket, counter moves are very effective for post players who don't have to finish with long shots. They are done in close quarters so they are quick and will often get your post player to the foul line.

When playing in the post, positioning is of the utmost importance. A foot or two can mean the difference in the effectiveness of your post play. If you set too high, you might find the need to execute skills that you're not comfortable with, set to low, you might find your options limited.

I like to have post players straddle the first marker above the block on the lane. This allows them the freedom to turn both ways, without going behind the backboard. More importantly, it gives passers more room and better angles to get the ball into the post. It also provides more room for cutters and better angles for screens.

Locating your defense BEFORE you receive the ball is critical to effective post play. Once you find your defense, only allow him to play you one way. If he is playing on your low side, work to keep him low, if on your high side, work to keep him high. Your perimeter players should be taught to pass away from the defense. If so, pivot with the pass. For example, if your post player is in the right post and the defense is low, the perimeter player should pass the ball to the post's right hand and the post player should use a pivot that will open him to the middle (right foot pivot). This will help your post player to be more assertive. If, after making the pivot, he fids his shot defended, he can go immediately to a counter, still using his right foot pivot (sweep, step-through).

By positioning properly on the court and using the body to position against defense, the post player becomes quicker, more aggressive and has more offensive options.

It all adds up to what could be a frustrating time, especially when your post player is not getting enough touches. Regardless, he has to be tough enough to play every play, regardless of the situation. He must do it again and again, play after play, game after game.

Coaches must take this aspect of the game and give it special attention. Pete Gillen, the great former coach at Virginia has a phrase he would use over and over again, "Let the big dog eat!" Other wise you run the risk of coaching a "bagel" (plenty of stuff outside and a hole in the middle).

If you would like to learn more about developing post players, take a look at Don Kelbick's simplified process that he uses to train pro players in the book

How To Develop High Scoring and Highly Skilled Post Players.

If you are interested to see what other people are saying about the book, view the bottom of this page for reviews.