Using the Flex Offense Versus a Zone Defense

The flex offense was designed to attack man to man defenses. As a result, most coaches that run flex use a different offense when facing zones. The obvious disadvantage to this approach is that you now have two separate offenses to teach.

Even though flex is designed for man defenses, some coaches have success using the flex against zone by making a few adjustments.

Here is the most common method that I see coaches use to attack the zone using the flex offense. It is simple and effective.

The pattern is very simple. You adjust the flex pattern by eliminating the down screen.


Here is the basic pattern... 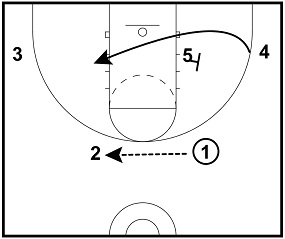 5 screens/seals the defender responsible for middle of the zone.

4 cuts to the block. 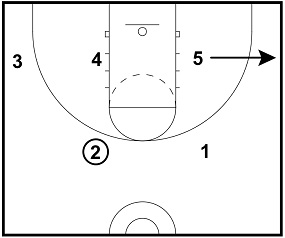 5 pops out to the corner. 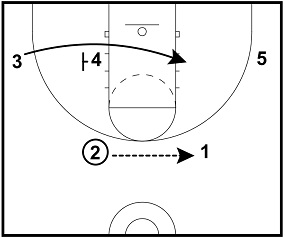 3 cuts to the block. 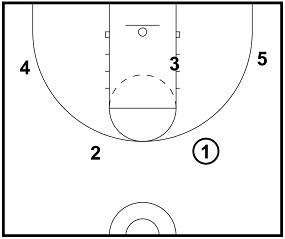 Players are in flex spots and the pattern continues.

When playing against zone, you may need your baseline players off the baseline (around the mid-post). This will help with spacing and passing angles. However, you should experiment and be aware of their positioning.

The key is to teach your bottom three players how to play together. If they run the pattern robotically you'll be in trouble.

Your screener needs to screen the middle of the zone. 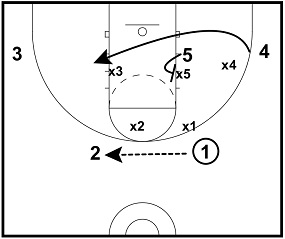 In this diagram, you can see the positioning of a standard 2-3 zone defense.

On the ball reversal, X5 will be responsible to cover 4 cutting to the strong side block. So 5 needs to spin and box/seal X5 giving 4 an opportunity to get open. 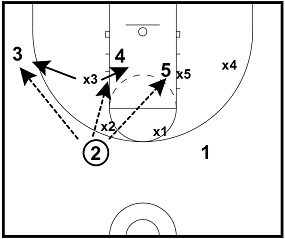 If 5 is able to set a good screen, you can see that X3 has a choice. He/she can either guard 4 on the block or 3 in the corner.

2 can pass to 3 in the corner for the open shot, 4 on the block, or hit 5 sealing on the backside.

With this basic pattern, you get constant overloads and simple movement with your bottom players to get the ball inside.

This by itself can work. You'll get shots in the corner, ball reversals, and looks inside. However, your effectiveness will be limited unless you teach zone offense principles.

The bottom players should be encouraged to box and seal players to create opportunities. These opportunities can be present before or after the screen. They can also be on either side of the basket. You'll notice that depending on how X4 and X5 react, there could be an opportunity for a seal on the weakside. 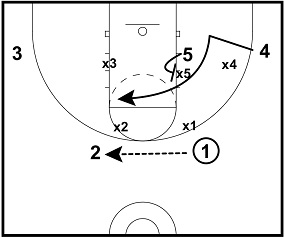 Again, they just need to play basketball. Maintain spacing and look for openings.

To be effective, you should get the ball inside via drive and/or pass. You don't have to score every time you go inside. Bring the ball back out, make the defense recover, look for an easy shot, and keep running the offense. Any time you make the offense move and adjust, you are distorting the zone and exploiting weaknesses. 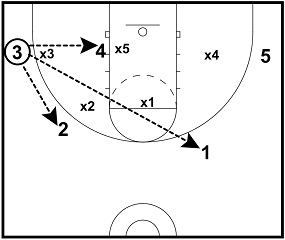 With the ball in the corner, X3 is drawn out and the player on the block will have a one on one post up opportunity. 4 should seal for position and post up. 3 can shoot the ball, pass to 4, or hit 1 on the skip pass. 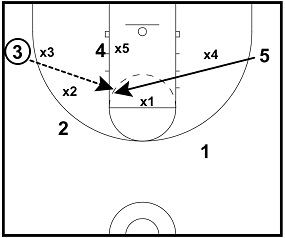 You can optionally allow 5 to cut to the high post / middle when they see an opening. If nothing is there, 5 should move back to their spot to resume the pattern.

When facing a 2-3 zone, the biggest challenge for the top players is to deal with pressure from X1 and X2. You'll want your best ballhandlers on top that are comfortable with potential pressure.

In theory, players 1 and 2 could stay in the same spots and simply shoot, drive, or pass. However, we all know that the defense will try to take that away and things won't be that easy.

Your players on top should look for ball reversals, look inside, find open spots, use their dribble, penetrate, and just play basketball.

The shallow cut is a simple way for the top two players to get movement.

You can use the shallow cut when the top player is getting denied and you need a pressure release. 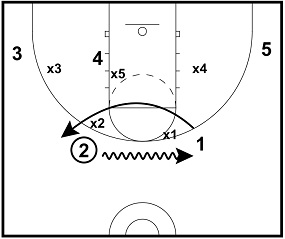 Shallow cut when ball is on the wing.

If the ball is on the wing and the ball reversal is denied, 2 can dribble at 1. This signals 1 to run a shallow cut and exchange positions. 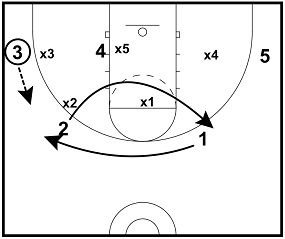 Shallow cut when the ball goes to the corner.

If the ball is on the corner and the pass back to the wing is denied, 2 can run a shallow cut. This will pull X2 toward the basket and open up the passing lane while 1 fills the open spot. This should allow for a quick ball reversal to 2 and continuation of the pattern.

As with any offense, there are principles you need to follow to make it work...

The key to zone offense is to "disrupt zone responsibilities". In a zone, each player is responsible for guarding an area. If you can momentarily force a defender to be in a position so they can't guard "their area", you have a chance to exploit the zone. This, in fact, is the zone's biggest weakness and why you should actually like playing against zones.

You know ahead of time where the defenders will be and which area they are responsible for. So now you can exploit those responsibilities via screening, cutting, player movement, and ball movement.

A variation to this pattern is to use a designated flex cutter. Have one flex cutter (rover) and the other two posts constantly screen the zone and open to the ball. The cutter should look to flash to gaps rather than run traditional cuts.