If you’ve been around basketball for a few years, you’ve probably seen this.

You have a player that looks great when going through a workout or practice. They can shoot it. They can handle it. And they have great footwork. You can’t wait to see them play against somebody.

Then you can’t believe your eyes. When that same player is placed in a competitive situation, they get absolutely destroyed. Some players even look like a cat trying to chase one of those lights with a red dot... in a room with 100 mirrors. They’re stumbling all over the place, awkwardly running into everything, and reacting a split second too late.

That is a slight exaggeration, but you know what I’m alluding to. They should be better.

While there certainly could be other reasons, one factor could be the lack of decision-making within training drills. At first, I made this mistake when preparing workouts and team practices.

This would be an example of a block practice drill that does not include decision-making.

Block practice has its purpose. However, without adding an appropriate level of challenge, players will not improve enough to be effective in actual game situations when they are competing against live defenders.

And this could be a primary reason that the workout stud / game dud player performs poorly in competitive situations. They don’t have many reps under their belt with a defense present.

This is a great way to make your drills variable and random. I like to call them basketball drills on steroids.

How To Put Your Basketball Drills On Steroids

When it comes to teaching skills, mentality, and decision-making, Don Kelbick’s Attack & Counter System is one of my favorite systems.

After that, you can utilize the methods below to continue to improve decision-making and game performance.

There are certainly pros and cons to every type of method used below. Based on your situation, you have to figure out which methods will help you the most and how much time you want to spend on each.

I prefer to look at them as complementary methods.

If it’s just you and the player in the gym, this is a way to include decision-making.

You can use hand signals. Here is an example of visual cues from Chris Oliver:

You can pass the ball from any location.

For dummy defense drills, the defender commits to an action which forces you to make a decision. Typically, you don’t have a defender try to stop you. After the decision has been made, you don’t play live.

The video below is an example of this. The defender over-commits to the shot or dribble penetration. The defense has no intention of stopping you.

Here is a drill for attacking down screens:

Here are a couple of other examples.

Example 1 - The defender hedges high on a ball screen. You decide to reject the screen, or maybe you will still attack high because the defender lacks lateral movement and you want to isolate that defender.

Example 2 - On a down screen, the defender "shoots the gap." A traditional decision would be to flare cut. However, you might also have a size advantage and decide that you’re going to curl. And you might post up if you don’t receive the pass immediately.

With these drills, you simulate a game-like situation and you play 1v1.

Then you can add rules and constraints. 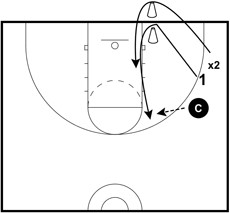 To make the drills more challenging, you can reduce court space, reduce time, reduce dribbles, or even add second defenders if you have enough players.

In the diagram to the right, it shows you a way that you can replicate a zipper cut.


Here is a drill to work on the speed dribble and finishing:

If you’re looking for more drills like this, you can check out 30 Competitive Skill Development Drills.

2v2, 3v3, disadvantage/advantage drills, and other variations are tremendous ways to develop skills and improve decision-making. You get a lot of repetitions with situations that very closely resemble the game.

With the inclusion of 1v1 drills, these are also called small-sided games (SSGs).

You can offer different rules and constraints to work on different parts of the game. For example,

You can also simulate any 1v1 drill and simply add one or two offensive and defensive players.


Here is a drill that works on attacking out of the fast break:

With 2v2, you can still get a lot of shooting repetitions while forcing decisions that involve help defense and a pass.

With 3v3, even though the reps will be fewer when compared to 1v1 and 2v2, you can simulate almost any game situation involving cuts and screens.

That’s why you should include a healthy mix of all of them.

Back in the day, you might not even need these drills for a shooting workout. Kids used to play plenty of 1v1, 2v2, 3v3, 4v4, and 5v5 on the playground or at the rec center.

However, kids are playing more and more in a structured environment almost all year round, so we need to create opportunities for this type of training because it has tremendous value.

How Much Should You Use Small-Sided Games?

Of course, it always depends on your situation and your objectives.

Nate Sanderson is the head girls’ basketball coach at Springville High School in Iowa, and also works as the product development manager here at Breakthrough Basketball. For the past three years, his goal has been to spend 90% of his practice time playing small-sided games, 4v4, 5v5, and other variations. The majority of their individual skill development is done in 1v1 or 1v2 situations while their team segments are almost always 3v3, 4v3, 4v4, or 5v4 before playing any 5v5.

During these three seasons, his team has qualified for the state tournament each year. The Orioles finished 2nd place in 2015, then won the state championship twice in 2016 and 2017. All the while, they averaged less than 15 turnovers per game and set a school record for assists in three consecutive seasons.

If you have a workout or practice where your objective is to develop shooting technique, you will probably spend a lot of time on drills without defenders. You may only use small-sided games to break up the monotony and engage the players.

On the opposite spectrum, I had an athlete who had a very good skill set but struggled with decision-making and aggressiveness. For the next six weeks, 100% of the workouts were small-sided games. He brought in one or two other players and we just did variations of 1v1, 1v2, and 2v1 drills. We worked on shooting, ball handling, and finishing.

In conclusion, if you're looking to improve decision-making, add some small-sided games to your shooting workouts and team practices. It is not the only way to teach basketball, but it obviously has produced some great results.

Even if SSGs just produce the same results as traditional training, athletes typically enjoy SSG training more. So why not have fun while getting better! You will get more kids that actually enjoy practice and want to do more of it!

The Rest Of The Series On Shooting & Drill Adjustments

Also, if you missed out on the entire series of how to improve shooting workouts and team practices, here they are:

When game-like shooting drills do NOT help

Shoot worse in practice to shoot better in games? Constant and Variable Practice

This Drill & Practice Adjustment Could Lead To A 36% Improvement During Games - Block, Interleaving, & Random Practice