Special note: This version was updated 2/20/17. Some terminology and examples were modified.


If you don’t know a lot about random practice, you definitely should read this.

Random practice can be quite deceiving. In practice, you will have more mistakes and it will be messier and more chaotic when compared to traditional training. However, random practice can lead to accelerated learning and better game performance.

In fact, there is research that led to a 36% difference in learning retention by using random practice.

Random practice can also lead to...

We’re also going to discuss how block practice, which is more of a traditional training, can actually be fool’s gold and trick you into thinking it’s providing more improvement than it actually is.

But first, let’s explain the differences in block (traditional training) and random practice.

On a side note, if you don’t understand variable and constant practice, you should check out Shoot worse in practice to shoot better in games. The article will help you understand everything here.)

What Is Block, Serial, and Random Practice?

The key here is to get to random practice.

Let's get a better understanding how...

First, let’s discuss block practice. Block practice is your traditional type of training. You isolate a skill and you repeat the skill over and over for X amount of repetitions.

So you practice skill A, B, & C separately with block practice.

Block (one skill or task) and constant (one version) is the simplest form to practice a skill.

In this example, you work on catching and shooting (one skill or task), and you shoot from the same spot repeatedly.

This would be an example of a drill that is block and variable.

You catch and shoot each time. You work on the same skill or task (block practice). However, you vary the location on each shot (variable practice).

Serial practice is where you work on multiple skills within a sequence. You pass, you shoot, etc.

In this example, you are working on multiple skills (Serial practice) with dribble penetration and passing, then sliding to a different spot and shooting.

This example is serial and constant.

Here is an example of serial practice and variable practice.

The player is working on multiple skills (serial) with dribble penetration and passing, then sliding to a different spot and shooting.

It is variable because the shot location, passing angle, and the position of the defender change every time. It is slightly different each time.

This drill is called String Shooting from Brian McCormick.

These explanations and drills were inspired by Brian McCormick's 21st Century Practice.

Here is a definition of random practice.

A practice schedule in which various discrete or serial skills that are required for performance in the sport are practised in random order, and where the learner does not practise the same task on two consecutive attempts.(Source)

A simple way to make a drill random is to add a defense. The video below of 3v2 string shooting incorporates random practice by doing the same thing.

There is some research from Shea & Morgan that indicated random practice yielded retention results that were 36% better than block practice.

Basically, Shea and Morgan had a group of people practice a series of rapid movements with their hand and arm. Based on the light stimulus, they would do a different series of movements.


And they timed how quickly this could be done.

So with one group, they did block practice and another group they did random practice.

With the random practice group, they practiced the multiple tasks in varying order. The participant didn't know which stimulus they would get repetition to repetition.

As you might expect, the first session was quite sloppy and much worse than block practice. They averaged 2.6 seconds. By the final sixth session, they closed the gap. The random practice group averaged slightly above 1.2 seconds.

So far the end result from the final practice session is relatively the same for both groups. 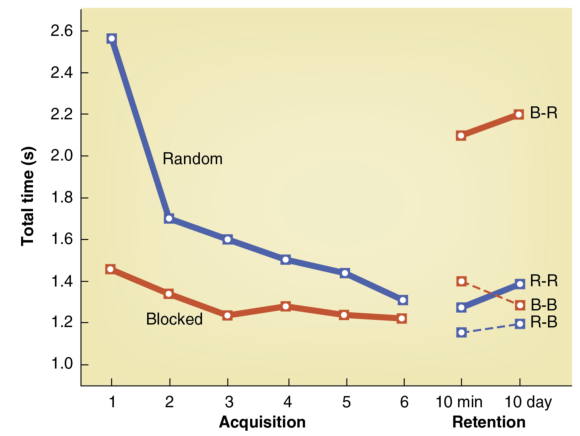 Now, here’s the kicker on the test and how random practice performed way better!

They tested each group ten minutes later and ten days later in a random environment. You know the environment that most represents a game where the same thing doesn’t happen over and over.

The block practice group performed much worse in the more random, game-like environment (B-R). Even 10 minutes later, their times scored skyrocketed from 1.2 seconds to 2.1 seconds. After 10 days later, it went a tad higher to 2.2 seconds.

So ten days later, that means the random practice group performed better by 36%! This also shows that the performance, learning, and retention is more permanent in the long-run with random practice.

So even though you won’t do as well at first in practice performance, you probably should add some random practice to your practice schedule and workouts. If you're a coach that strictly uses block practice, this could certainly help your team improve performance during games. Now, by what percentage? Who knows.

Now, think about the study above. At first, you see that you’re doing noticeably worse with random practice compared to the more traditional training of block practice. There are more mistakes. It appears messy and chaotic.

What would your first instinct be? It might be to revert back to block practice because that’s where you see immediate improvement.

However, as shown above, block practice doesn’t transfer nearly as well to game performance. It’s almost like fool’s gold.

This could be why some players shoot way better in practice than during games.

So why is there a better transfer from random practice? Among other reasons, here are a few.

1 - Random practice training is similar to what happens during a game.

You drive, you pass, you shoot, you defend, you rebound, and you alternate between all of these skills. And each repetition is different. This is how the game is played.

Each repetition requires engagement and focus. You have to pay attention and be mindful.

When you do block practice and do the same thing 10 times in a row, it’s easier to lose focus and start thinking about what you’re doing after practice.

3 - Players are more adaptable and there is little shock value during games.

As you can see, another major element is players are more ADAPTABLE to new situations with random practice. This is because you practice in a way where you have new situations every repetition.

Now, when a new situation happens during a game, there is no shock value. And you’ve trained to attack these situations without hesitation.

Summary of Characteristics & Benefits of Block and Random Practice

Here is a great summary of what you will see with block and random practice. This is from Brian McCormick’s 21st Century Practice.

Why You Should Still Include All Of These Types Of Practice... Constant, Block, Variable, Serial, Random

You might be thinking... “Well, if variable and random practice yield the best results why even use constant and block practice?”

Personally, I think you should include all types of practice for a few different reasons.

1 - Well, for beginner basketball players, you obviously want to include constant and block practice for learning and acquiring a technical skill. Research has shown that to be effective. However, it would probably be a good idea to add some variable, serial, and random practice as well. It can help make the learning more permanent.

2 - As mentioned in the previous article, I think constant or block practice can be great for a warm up, building confidence, and just polishing technical shooting skills.

3 - In regards to this topic, I don't know if research can be conclusive in what percentage of block, serial, constant, variable, & random practice should be used. It's impossible for humans to FULLY comprehend the influence and all of the factors that affect performance. The effect can vary player to player and team to team.

For those reasons, I like to use all of these types of practices. I like to look at them as a tool in the toolbox. I like to see them as complementary rather than opposing.

What’s Next - Basketball Drills On Steroids!

In our next article, we’re going to introduce another factor. It could completely change how you construct workouts and practices.

And I think it’s another reason that you might see big drops in performances from practice to games.

And we're going to show you exactly how to structure your drills to make them better. You might call them basketball drills on steroids.

We are also going to talk about the workout stud who transforms into the game dud and how to fix that.