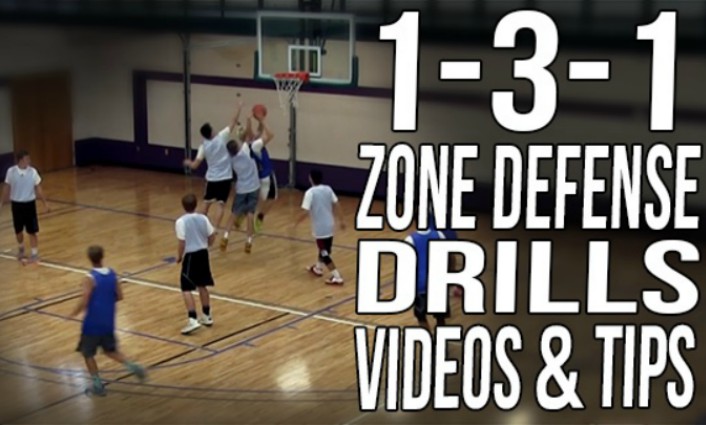 The 1-3-1 zone is an effective defense that can be used in the half or full court. It can be run as a trapping defense, soft denial (to force skip passes), or packed in to force teams into poor outside shots. 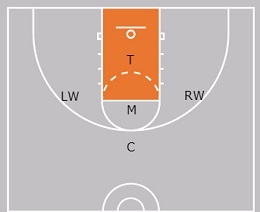 Some coaches use the 1-3-1 as a defense to switch things up, while others will use it as their primary defensive scheme.

The basic and traditional alignment is with the chaser (C) at the top, left wing (LW), right wing (RW), middle (M), and the tail (T) ready to cover the corners.

The 1-3-1 defense offers a number of advantages that you don’t find in other defenses...

1. It’s strong in the middle of the floor. Three defenders are always guarding against penetration into the lane. The 1-3-1 defense makes it difficult to enter the ball into the post while providing excellent coverage of the 3-point line.

2. It has fewer moving parts than most zone defenses. Compared to other zone defenses, there are fewer “transitional defenders” (players who have to cover multiple areas).

3. It is the most versatile of all zones. With slight adjustments, the 1-3-1 zone can be played with varying pressure points at all levels of the court.

6. It is not as common as other zone defenses. Few college teams run the 1-3-1 zone, and as a result, you don’t see many youth and high school teams run the 1-3-1. As such, the uniqueness of the 1-3-1 provides an advantage against teams that do not play against it very often.

No defense is perfect. There are some disadvantages of the 1-3-1 to consider:

How It Works - Basic Overview

In order to help our players better understand their priorities defensively, we have certain terminology we use to define areas of the court. 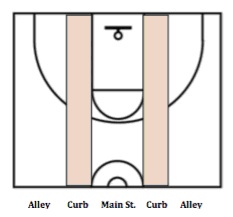 Main Street – The middle of the court between the lane lines extended from baseline to the half court line. A key focus for us defensively is to keep the ball out of Main Street.

Curbs – A four-foot area from the lane lines toward the sideline extending from baseline to half court line (see shaded area above).

Alleys – The area from curb to sideline, extending from the baseline to the half court line.


Cardinal Tenets Of The 31 Defense

Below is a list of tenets, or principles, that are key to making the 31 Defense work effectively.

1. Pressure the ball to make passing difficult. The defense is built on pressuring the basketball. We want to take away vision and contest every pass made by the offense. Defenders should be in a great stance to harass the ball-handler at all times – forcing soft lob passes over the top or bounce passes. We want players to anticipate and be in position to intercept passes. Our players must be positioned properly to prevent reversal passes.

2. Squeeze the seams. We want to stop dribble penetration by squeezing the gaps in the zone to prevent the ball from getting into Main Street.

3. Own Main Street. We must keep the ball out of the middle of the floor. Main Street is defined as the area from the defensive pick-up point to the basket between the lane lines extended. All defenders should be aware of ball movement so that Main Street is controlled. We constantly tell our players, “No Main Street!”

4. Maintain the shape of the zone. Many zone offenses attempt to distort the zone through their spacing, cutting, and by overloading one particular area of the zone. Therefore, it’s important that we do not allow there to be too much distance between our defenders. The defense should move in unison, as though they are “tied together on a rope,” and must move on the flight of the ball. We do not want the zone to be distorted in such a way that gaps are exposed between defenders that can be exploited by the offense. We want all defensive movement to occur while the ball is in the air so that defenders are in proper position on the catch.

5. Contest EVERY shot. Research has proven that contested shots are going to dramatically increase the effectiveness of your defense. Open shots are going to be made at a higher percentage than those that are contested; therefore we want to make them miss by contesting every shot!

6. Finish every possession by filling the Percentage Rebounding Areas. Players should form a triangle around the rim and go after the ball with reckless abandon.

7. Play great defense WITHOUT FOULING. We want to play with great intensity and effort while keeping our opponent off the free throw line. We do not want the other team to get into the bonus, especially in the first half.

Youth teams (12 years old and younger) should avoid the 1-3-1 zone. Only advanced youth teams that already have learned strong man to man fundamentals should consider this 1-3-1.

Any college, high school, or advanced middle school team can see a lot of success using the 1-3-1 defense. It’s a proven defense and a great option for anyone looking for an “equalizer” or to gain a defensive advantage.

You can use this as your primary defense or as a change up defense.

There are a number of variations you can run out of the 1-3-1 defense. In this video, you can see the automatic butterfly coverage when offenses throw “ping pong” passes:


Forty year college & high school coaching veteran Will Rey explains an automatic adjustment your 1-3-1 defense should make to prevent the offense from throwing the ball back and forth between two players (ping-pong).

Other variations of the 1-3-1 include:

For a thorough explanation of the 1-3-1 defense, the variations, and how to teach it step-by-step... watch Will Rey’s 31 Defense - The Disruptive 1-3-1 Zone Defense.

College & high school coaching veteran Will Rey explains when and how your 1-3-1 zone defense should automatically trap. 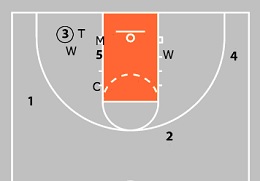 In the clip above, Coach Rey explains when your defense should automatically trap, or blitz out of the basic 'PLUG' coverage in his 1-3-1 zone defense.

The automatic trap comes each time a player drives baseline, with the tail and the wing of the defense trapping. Since the two defenders are trapping, the rest of the defense is in a 'pack the lane' coverage.

It's important for the tail to cut off the baseline drive and for the wing to make a hard trap, or the defense can break down.

Our basic 31 Defense is a quarter court defense that can be extended to half court should the Chaser choose to pick the ball up near the half court circle. However, we can also extend the 1-3-1 defense 3/4 court or full court by running our “41 Defense.”

This diagram demonstrates how we extend our defense into the backcourt in our 41 Defense.

The CHASER picks the ball up around the free throw line in the backcourt. He should exert maximum pressure while ushering the ball toward the sideline.

The BALL SIDE WING traps the ball with the Chaser along the sideline.

The WEAK SIDE WING rotates to take away the middle of the floor.

One alteration we make in the 41 Defense is to invert our Middle and Tail. The MIDDLE becomes the basket protector at the back end of the defense.

The TAIL becomes an interceptor on the ball side of the court to take away any passes up the sideline.

The only pass we allow is the reversal pass to the other player in the backcourt (4).

In our regular 41 Defense, we will trap one time before sprinting back into our regular 31 Defense. If we are in a late game situation that requires constant pressure, we will run “41 Defense ALL OVER” which means we continue to trap every pass.

The diagrams illustrate how we extend full court to pressure the inbound pass in our “51 Defense.”

The MIDDLE plays on the basketball making it difficult for the inbounder to see and pass.

The WINGS move up to deny the two nearest receivers.

The CHASER plays the middle of the floor.

The TAIL is the basket protector in the back of the press.

When the ball is inbounded, the MIDDLE and BALL SIDE WING trap the ball aggressively.

The CHASER moves to take away any pass up the sideline.

The WEAK SIDE WING takes away anything to the middle of the floor.

The TAIL guards the goal.

Similar to the 41 Defense, we want one good trap before sprinting back into our regular 31 Defense. However, if the game requires constant pressure then we will be in “51 Defense ALL OVER” to trap the ball with the two closest defenders.

Here are a few drills to help isolate the movement of the various positions on the floor.

This drill isolates the backbone of the defense: the CHASER, the MIDDLE, and the TAIL. These three must move in unison as the ball moves about the perimeter.

Four players are positioned around the perimeter with two additional players on the low blocks. The perimeter players move the ball randomly while the defenders practice their coverage responsibilities.

This drill isolates the coverage responsibilities of the two WINGS.

The drill begins with two players located in the guard lanes, and two additional players stationed on the low blocks.

As the ball is passed from guard to guard, the Wings follow their most basic rule: As the ball comes to my side of the floor I come forward, as the ball goes away from me, I go to cover the block.

The perimeter plays may attempt to throw entry passes to the opposite post to test the Wing's ability to cover. The Wings should be coordinated in their movement and never side-by-side in this drill.

We do this drill for about 30 seconds for each set of Wings.

Defending BLOBs with the 1-3-1

How do you defend baseline out of bounds plays?

There are several ways to defend baseline out of bounds situations... 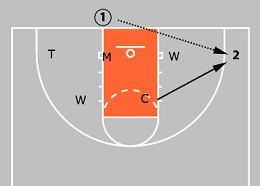 The first option is to continue to stay in the 1-3-1 Zone. When the ball is taken out on the baseline, the coverage responsibilities of each position are as follows:

TAIL - Covers the ball side baseline area to the corner.

MIDDLE - Covers the ball side block.

BACK SIDE WING - Covers the weak side block.

BALL SIDE WING - Covers an area above and between the Middle and Tail.

CHASER - Covers an area above and between the Middle and Back Side Wing. The Chaser is also responsible for any catch in the weak side corner.

Once the ball is passed to the top, the defense returns to its normal 1-3-1 positions. 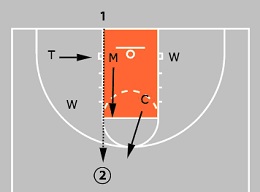 Over the years we have also defended baseline out of bounds plays by playing our 2-3 Zone in the same alignment as illustrated above. If the ball is passed to either corner, we stay in our 2-3 Zone for the rest of the possession. If the ball is thrown above the free throw line then we transition into our 1-3-1 Zone.

The primary factor we consider when deciding whether to stay in the 1-3-1 Zone is our personnel. When our teams are bigger, and take up more room on the floor, we like to stay in the 1-3-1 Zone as much as possible. At other times, when we are a bit smaller, we have found that the 2-3 Zone provides better coverage of the basket area particularly when the ball is being inbounded on the baseline. 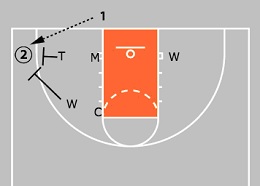 We align our defense in the same manner as above (1-3-1 formation). However, when the ball is inbounded we may run an immediate BLITZ with our Pack the Lane coverage away from the ball.

The Tail and Ball Side Wing converge to trap the ball on the entry to the corner. Once the ball rotates back to the top, we return to our standard 1-3-1 defense.

If you'd like to dig deeper and get more information about developing an effective 1-3-1 zone defense, we highly recommend Will Rey’s 31 Defense DVD and eBook. It explains the 1-3-1 defense in detail and breaks the defense down step-by-step and movement-by-movement so that your team will be able to run it effectively when they take the court.