In One Minute - This Boosts Your Shooting and Scoring

Another important layer to the Attack & Counter Skill Development System is the design of the counter basketball moves.

This basketball moves tip will lead you to more points, better shooting percentages, and more fouls on the defense. And ultimately, this will lead to more WINS for you!

And you can literally implement the change in one minute.

Coach Don Kelbick explains it in the video below.

As explained in the video, the counter basketball moves are designed to go opposite of the defense.

In Don’s system, you go opposite of the pass by...

The same principles apply if you teach the hop.

Below, we are going to show you how this helps you beat the defense 1v1 and take advantage of the position of the help defense.

How The Counter Moves Help You Beat Your Defender 1v1 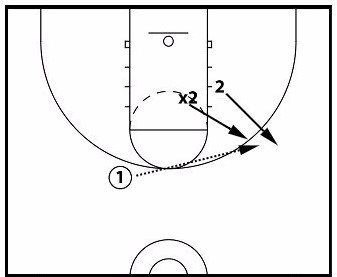 On a cut to the wing, the defense is inside of the offensive player.

This happens most of the time when you catch the basketball.

In the diagram, the defender is slightly to the left of the offensive player. 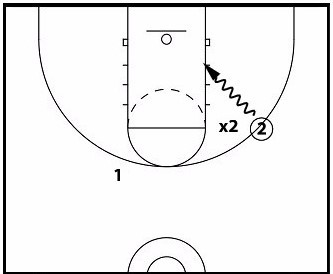 As a result, it will be easier to drive by the defender going to the right… which is opposite of the passer.

There is a bigger driving lane. And it’s more of a direct line to the basket which means you can get there quicker.

If you tried to go left, you would make more of a rounded cut to get by the defender. Additionally, it takes you back into where most of the help defense is located.

How These Counter Moves Help You Beat Help Defense 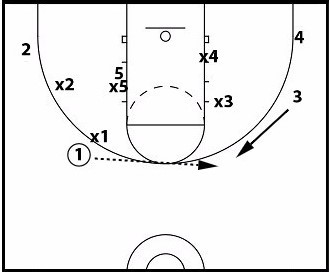 Here is an example of a pass from the wing to the opposite side of the floor.

As mentioned above, the counter will be a drive opposite of the passer... to the right side of the floor in this situation. 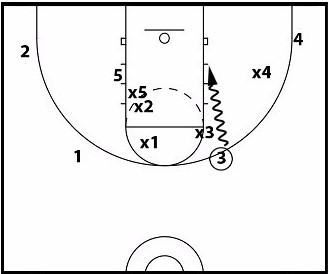 And look at the positioning of the help defense. There are three defenders to the left and one defender to the right.

Which is easier to beat?

The same things happen in a 3-out, 5-out, and on passes to the corner.

This tip helps you attack quicker and puts you in better situations to score.

What If Somebody Trails You And Is Not On The Inside? Won't This Take You Directly Into The Defense? 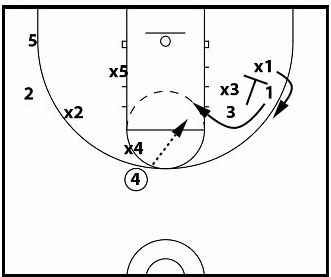 A more common example of this would be when a defender trails you around a screen.

Personally, I've never had an issue with this. The player just attacks to score.

In Don Kelbick's Attack & Counter System, he emphasizes to play instinctively and attack.

I also teach my players that if a good scoring opportunity presents itself, take it.

So you just catch and go. Or if you want to use Don's terminology, you catch and sweep.

And this is a very flexible system. It's meant to teach players how to attack, play instinctively and aggressively, and put them in positions where they will have the most success.

If you need to tweak something based on your offense, by all means, do so.

On a side note, the way that Don Kelbick’s Attack & Counter System teaches you how to attack screens would actually make sure you capitalize on this situation every single time.

If you want to learn more IMMEDIATELY, you can watch the video via streaming, even if you purchase the DVD.


What's Next Is Controversial...

In the next article of this education series, we're going to discuss something that is a little more controversial at first glance. However, once you think about it and analyze its effectiveness, it could be a game-changer for how you approach mentality.

If you did not see the previous articles and videos, check out part 1 and part 2.