How To Accelerate and Simplify Player Development To Win More Games 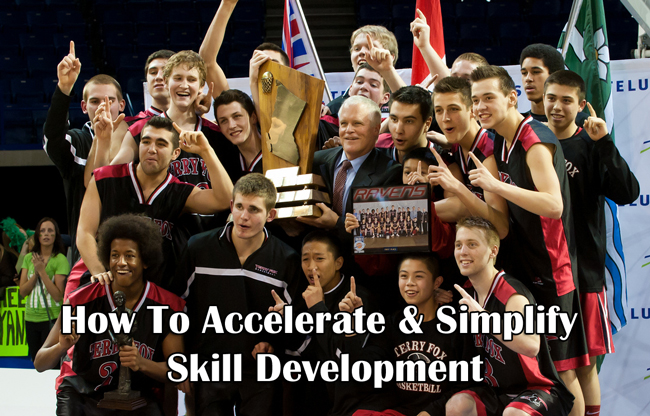 I think we can all agree that player development is vital to the success of your team. If you want to win games, you have to spend time developing better players.

That's why you're seeing recruiting battles and scandals at the youth, high school, and college level. And that's why NBA teams spend millions of dollars scouting players.

If you don't develop your players, other teams will catch you whether you coach a local 3rd grade team or a professional team.

Now, I think we can all agree that player development is vital to the success of your team. If you want to win games, you have to spend time developing better players.

However, there is a big problem... with all of the coaching information out there... what do you teach?!


How To Fix The Information Overload Problem

With the Internet, you are able to access a lot more information.

Early in my coaching career, this developed a huge problem for me. I made things way too complicated. And my players suffered because of it.

What do you focus on?

How do you even incorporate it into practice and skill development?

And a bigger question... does this stuff even make your players or your teams better?

Instead, it often makes things more complicated and creates paralysis analysis in your players. They become less confident and less assertive. And this leads to poor results. And fewer wins.

Nearly a decade ago, I was very fortunate to meet NBA Skills Trainer Don Kelbick.

For those of you who don’t know Don Kelbick, he has trained Olympic gold medalists and NBA All Stars like Joe Johnson, NBA Champions and NBA All-Defensive Players like Bruce Bowen, NBA 3-Point Shooting Leaders like Raja Bell, JJ Barea, and thousands of collegiate, high school, and youth players.

Don Kelbick is a master at simplifying the complex subject of player development.

Don says, "Rather than teaching you 100 hundred different moves, I will teach you 3 pivots and 3 counters and how to apply them in 100 different situations."

Even though, there is more to the way Don teaches... this alone dramatically changed the way I teach.

One piece of footwork that Don teaches is the drop step.

Here is a video of a drop step in the post. That way, you can visualize the footwork as we explain the situations.

You can drop step in the post to score.

You can drop step on the perimeter when a defensive player overplays the passing lane.

A defensive player goes for the steal on pass to you and misses. Instead of turning into the defender to attack the basket... simply catch the ball, drop step, and dribble to the basket.

You can drop step to clear space on the perimeter when the defense is harassing you. Some call this space step. This helps create space to attack or pass.

You can drop step as a finishing move. When attacking the basket, you pick up your dribble to avoid the defense, and drop step to the basket. Some call this a spin.

You can drop step on defense to reposition your hips. The only difference being that you tell them that you don't use a pivot foot.


Here is a video clip that talks about situations 2 and 3.

This teaching tactic applies previously learned principles. Why is this important...

If you can refer to previous learned principles and apply it to a new situation, it greatly increases your rate of learning and skill development.

You don't have to relearn how to walk up the stairs. You've done this before, but in a different situation.

Because of this, it's easy for you to figure out how to walk up the stairs.

Now if you take the previous drop step example, you don't teach 5 different moves and give it 5 different names.

You teach the player one footwork move in 5 different situations. You tell them that they've already learned this. The only difference is that it's in a new situation.

You would be amazed at how quickly players are able to pick up this up.

You can progress through skills much quicker...

And it greatly accelerates your players' development.

This gives you more time to work on other things and develop better skills!

The great thing about the way Don teaches is that you can also combine post and perimeter workouts. Since the footwork is the same, the only thing you change is the distance that the player performs the drill from.

For example, to turn and face the basket in the post, a player will use a front pivot.

For a perimeter player cutting from the corner to the wing, you can use the same footwork. (Note: It's irrelevant if you teach hop, pivots, or both.)

Now you can take your whole team through the whole footwork series without having to teach different things on different ends of the court. 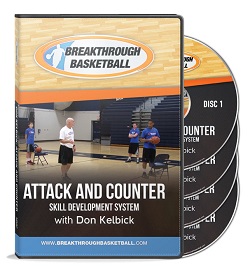 Now if you want to learn exactly how to accelerate your player development and win more games by simplifying the teaching process, check out Don Kelbick's Attack and Counter Skill Development System.

There is a 100% Money-Back Guarantee to remove all of the risk.