Even though, we were a man-to-man defense team 95% of the season, our head coach decided to run a junk defense against them to try to slow down their attack. It worked quite well, because we were tied with 3 minutes left and held Perry Ellis to season-lows on points (9) and shot attempts (5). http://www.maxpreps.com/athletes/0FAULXWUtEyRO5p9ZsRHIg/basketball-winter-10-11/stats-perry-ellis.htm. However, we couldn't pull out the victory as their other players stepped up and we missed a few shots.

We ran a hybrid of Lute Olson's 1-1-3 zone defense and a box-and-one. For simplicity, we'll just call it the Rotating Diamond and One Defense, because that's what it looks like.

The only difference between Lute Olson's 1-1-3 zone defense is that we only have one player on the top of the zone. Bottom rotations are the same. The top defender's rotations are very similar as well.

Once you learn the rotations of the Lute Olson's 1-1-3 zone defense, it's so easy to do that you don't even have to practice it. We actually did this adjustment during the first half of the state championship game and had never run this adjustment before.

One defender fronts and never leaves the opposing team's best player. For us, this opposing player was Perry Ellis. Also, for simplicity reasons, we will not have the offensive player being boxed move or touch the ball. 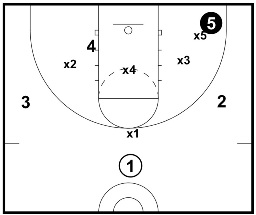 x1 applies pressure on the basketball. x1 will not leave 1 until a pass is made. 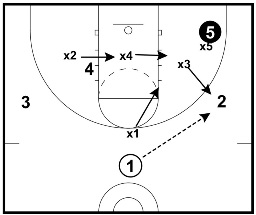 x3 applies a hard closeout to take away the shot.

x1 slides down to deny a pass into the high post via a post or a cut and help out on dribble penetration.

x4 slides to ball side. x4 will full front any offensive players on the block.

x2 slides towards the middle of the lane. 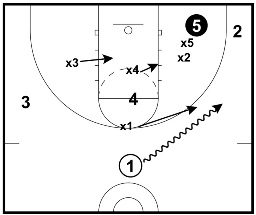 When the guard dribbles from the top to the wing, x1 stays on the guard.

x3 slides over to the lane area.

x2 is ready to defend a pass to the corner. 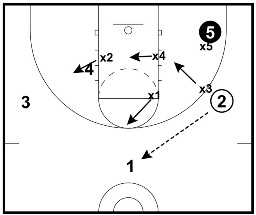 x1 rotates over and defends 1. 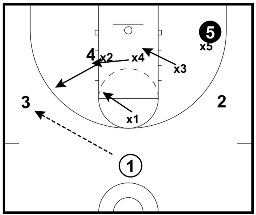 x2 takes away shot (hands high!) and forces ball to sideline or corner.

x4 slides over to take away any passes to the post and help on baseline drive. 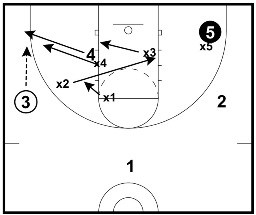 Pass To The Corner

x4 sprints to defend 4 and takes away the shot.

x2 sprints to protect the basket and weakside block.

x1 drops a step to help. 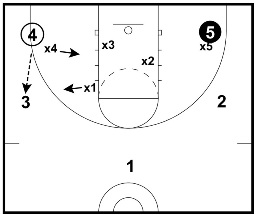 Pass From The Corner To The Wing

x1 defends the wing. The guard always takes the pass out of the corner to the wing.

x3 defends the low post and fronts if an offensive player is there.

x4 slides down to help.

x2 protects the basket and weakside. 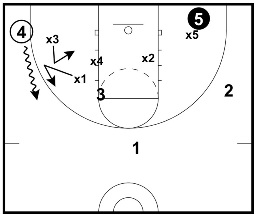 Ball Is Dribbled Out Of Corner

4 dribbles out of the corner.

x3 stays with the ball until x1 slides over to defend the ball and calls him off.

x3 slides down to help. 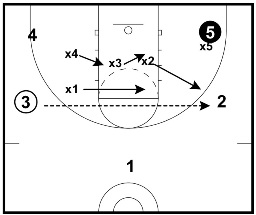 x4 protects the basket and weakside. 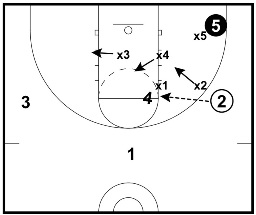 x2 slides down, but is still close enough to close out on the wing.

x3 is positioned to closeout on a pass to the corner or wing. 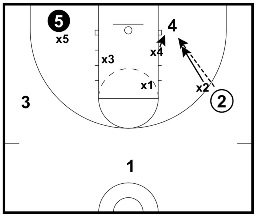 x3 slides over to protect the basket.

x1 drops down a couple of steps to defend any cutters.
Related Pages and Helpful Resources