Build your shot from scratch or fix a "broken" shot in a few simple steps...

And take the proven path to elite shooting and scoring - no matter where you're starting now.

Before you take another shot in the gym, I want you to stop...

Because there's a new breakthrough system players are using to become deadly accurate shooters from anywhere on the court...

All by following the same model as countless NBA and D-I marksmen who've come before them.

It's based on extensive research around muscle memory and skill acquisition...

And it finally solves the dilemmas even the hardest-working players struggle with...

Thanks to this elite step-by-step Shooting System...

You could turn into a dead-eye shooter with unshakable confidence...

And maybe the best part is...

You don't need a 40-inch vertical or Zion Williamson strength.

This system shows you how some players become elite shooters.

Yes it will take work...

But if you put in the time, you could have your best season yet... 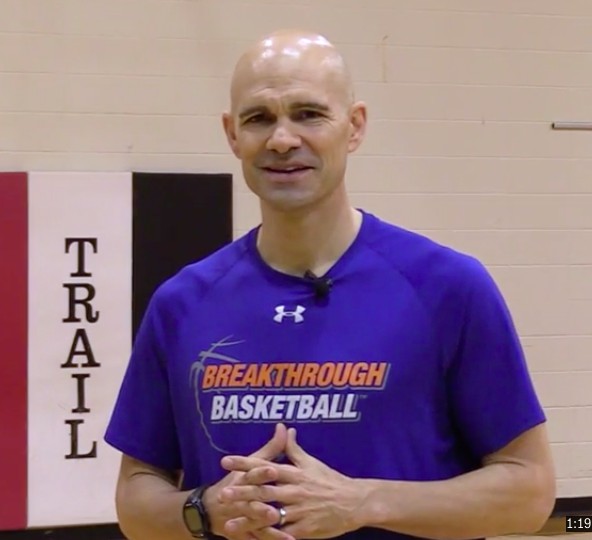 I've been coaching for over 20 years - working with dozens of D-I collegiate players (including Duke, Michigan State and Kentucky athletes) - several of whom have gone onto the NBA, including Willie Cauley-Stein, Alec Burks, Semi Ojeleye, and Michael Porter Jr.

I've also conducted camps for thousands of 5th to 12th grade athletes at Breakthrough Basketball camps and helped transform the shots of athletes at every age level, skill level and body type.

So whatever level you're at now, please know that I understand... and I have battle-tested solutions for many of the obstacles you're facing.

I'm really looking forward to sharing my Shooting System and helping you develop a consistent fluid shot that hopefully takes your entire game to new levels. 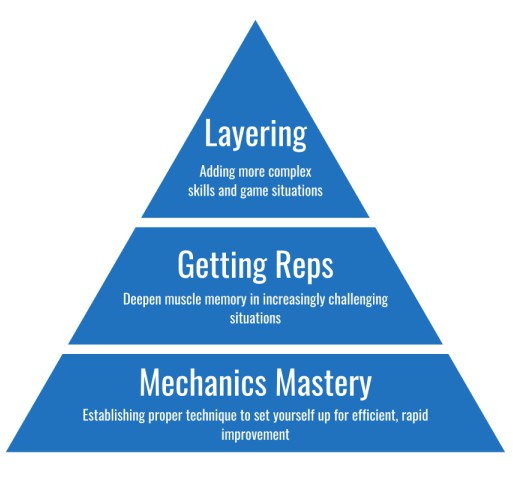 But there's only one way to get great mechanics...repetition of the right form.

Yes, you CAN make shots with bad form...

Put another way, Mullin is saying you can go 8X faster with the right mechanics...

And make the same improvements in 1 month that would take other players 8 months.

Which player do you want to be?

Great Shooters vs. "Everyone Else" 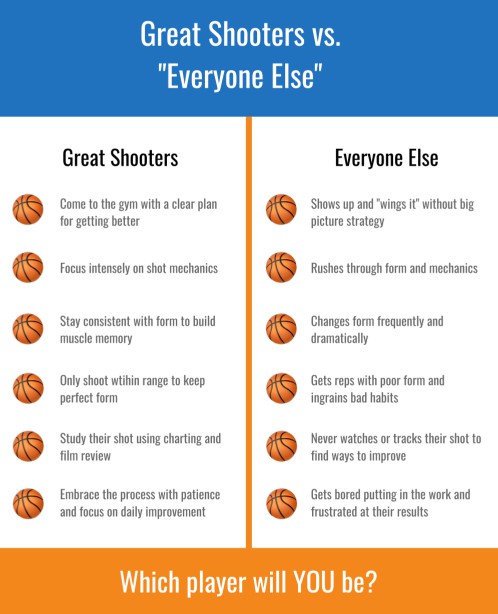 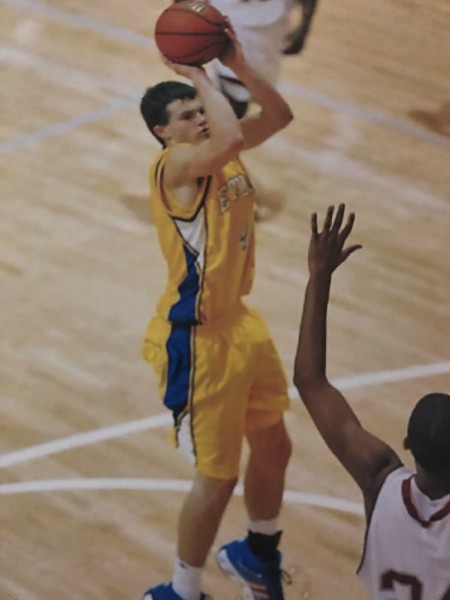 "My nephew Chris showing off his jump shot on the varsity court. Hard work pays off."

That's the call I got about my nephew Chris.

He was devastated because all his friends made the 8th grade team except him. Not only was his shot broken, the rest of his game wasn't very strong either.

I worked with him for a week using the System I'll share with you in a moment...

And I told him, "If you do this all summer, I guarantee you'll make the team in the fall."

He put in the work and that's exactly what happened.

But he wasn't satisfied!

He kept following the System during the season...

By the end of the year, he was the second best player on his team (a large school outside of Atlanta).

Fast forward two more years and he's All-Region in Georgia - and the year after that heading to college on a basketball scholarship!

His keys to success were SO SIMPLE...

And they can work for you whether your goal is to make the team, get more minutes, score more points or get college scholarships.

Your mechanics are strong and consistent, but you have limitations like:

(Note: We use 70% as the baseline because of "slippage" in games. Shot percentage goes down approximately 30% in games. So a 70% practice shooter will hit about 40% of similar shots in a game.)

"Here Are What People Are Saying..."

You read about my nephew Chris, but he's just one of thousands of players I've worked with, like these...

"Jim does a great job teaching the kids the basic fundamentals of shooting. Excellent drills I can now use for the team I coach. My son is now very motivated to improve his game and work hard at his skills."

"Jim Huber is the best clinician I have ever been around in 20+ years of camp work and coaching."

"Jim Huber is a force of nature. Informative, exciting, motivational. It is obvious that Coach Huber not only knows the game inside and out, but he also has the rare ability to break down and teach the most complex idea to every age level."

What I tell each and every player...

If you're willing to put the work in daily and follow the plan without fail - then I guarantee you will improve your shot. In fact, many players become one of the best shooters on their team within a few months.

If you're already a consistent shooter, you can take your game to the next level - whatever that is for you.

And this is the system that will take you there...

The Breakthrough Shooting and Scoring System with Jim Huber 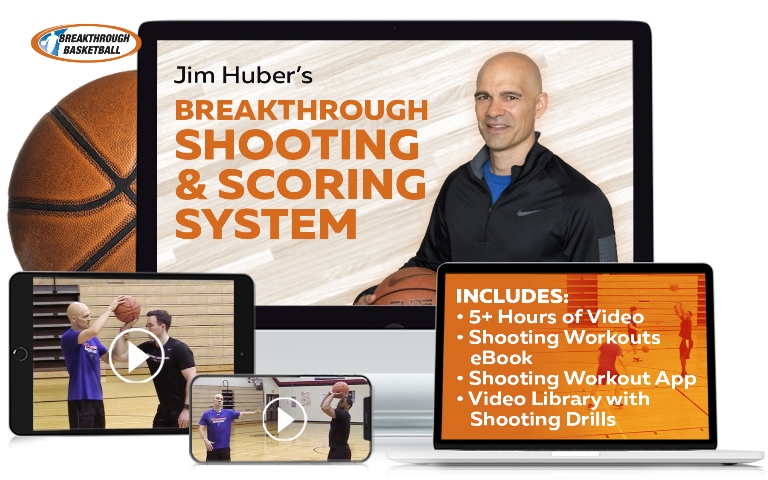 A complete step-by-step shooting system for becoming a fluid and consistent shooter - even against tough defenders.

This exact system has helped my players reach the highest levels of basketball.

Follow through and you CAN become a much better shooter... Some players even become feared scorers with a picture-perfect shot other players wish they had.

Who's This Program For?

This program is for players with a burning desire to become consistent shooters with deep range, but feel:

This is your step-by-step "Cheat Code" to reach your next level - with aspirations to become the best player on your team, in your conference, city or state.

*The Breakthrough Shooting & Scoring System is designed for players 5th grade and up (and works with all skill levels).

What Parents, Players and Coaches are Saying...

"Jim Huber is a force of nature. Informative, exciting, motivational. It is obvious that Coach Huber not only knows the game inside and out, but he also has the rare ability to break down and teach the most complex idea to every age level."
"How do I know my son valued what he learned (from Coach Huber)? He asks about skills learned and he puts it into practice every day."
"My daughter felt better, more confident and (Jim's instruction) seemed to cure her of some of her hesitancy shooting. Coach Huber is fantastic."
"Huber delivers...intensity, passion, skill training and the best messaging I have seen".

When Next Season Tips Off
(Your Off-Season Plan)

Many players who have put the work in and follow the simple training and workouts I'm giving you, have developed:

Great players all have THIS...

The value of this system really comes down to two things - time and (of course) money.

Great players have a sense of urgency. They refuse to let opportunity pass them by because they weren't working hard enough or following the right plan.

If you aren't getting better EVERY single day, other players will pass you by.

The Breakthrough Shooting and Scoring System gives you a plan you can easily follow. It helped many players become an elite shooters and scorers.

Hiring me personally to teach you these strategies costs $150/ hr. Just one session a week for 8 weeks would cost $1200.

But you don't need me there in person with you to develop a great shot.

With the Breakthrough Shooting and Scoring System, you can do it on your own for a fraction of the cost...

Get Instant Access to the Breakthrough Shooting and Scoring System with Jim Huber for just $145 $101 (Sale Ends Monday, November 28th!).

JOIN NOW
Click the "Join Now" button to enroll in the Breakthrough Shooting and Scoring System with Jim Huber at a limited time 30% Discount.

Module 5: Advanced Scoring Moves Off the Dribble (Creating Your Own Shot)

JOIN NOW
Click the "Join Now" button to enroll in the Breakthrough Shooting and Scoring System with Jim Huber at a limited time 30% Discount.

Guaranteed to Transform Your Shot
(60-Day Money Back Guarantee)

If you follow this program, you will learn how the best players become consistent, dead-eye shooters with deep range and the confidence to let it fly.

You're following the exact same principles all-time great shooters before you have followed...

And I'm certain you'll look back at this as a turning point in your basketball journey.

But if for ANY reason you don't feel like this is the right program for you, we will happily refund 100% of your purchase price.

No questions. No hassles. No worries.

We're making sure you have nothing to lose and everything to gain - because we know how quickly your shooting can improve.

Here's Everything Your Getting When You Enroll Today

Plus over 21 Months of Transformational Shooting Workouts to give you a fluid, consistent jumper you're confident in.

Take Your Place at the Top of the Scoring Leader Board

For many, two things stand in your way of becoming an elite shooter with a scoring game other players envy...

The first is a proven plan you can follow to consistently and strategically improve as quickly as possible.

The Breakthrough Shooting & Scoring System gives you all of that.

But another obstacle is your willingness to take action.

You're the only one who can make that decision.

And once you do, by following this Shooting System, you will give yourself a chance to reap the same benefits as so many great shooters before you:

This is your moment to take action.

So click the "Join Now" button below to enroll in the Breakthrough Shooting and Scoring System with Jim Huber and let's get to work!

Here's to a career year in scoring next season! 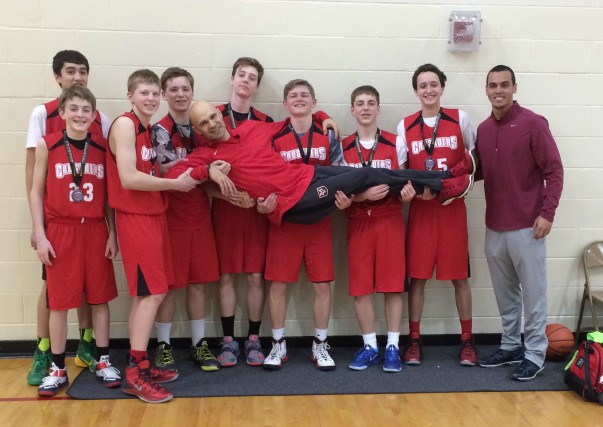 Customer Reviews
Average Rating
5
( 6 )
Based on 6 reviews
Review This Product
Rate and review this product to let others know about your experience.
WRITE A REVIEW
SORT REVIEWS BY:

Michael Witherspoon from MATTESON, IL
4/10/2022 at 12:19 AM
I like the way Jim is able to break down every aspect of shooting.
This review is helpful

A. Garcia
4/8/2022 at 8:28 AM
For anyone who wants to get better at scoring but isn't really sure how to get there, this system will help you get there.
This review is helpful

Michael from NORTHAMPTON, MA
9/17/2020 at 11:54 AM
I have been interested in basketball shooting since I was a teen & I still have Bill Sharman's book on basketball shooting(1965)! In recent years, I have studied several authors/experts from Hopla to Kelbick to Norland & others! Coach Huber explains the fundamentals very well but what distinguishes this product are the graded workouts for each part of the jump shot technique & following this system should allow the player,/s who follows it, success in jump shooting a basketball! I don't totally agree with everything presented here, however, my differences are minor & may only apply to different individuals, as some players have minor differences with the technique presented by Coach Huber.
This review is helpful

Steve from indianapolis, IN
5/15/2020 at 10:48 AM
I started coaching in 1962 and I thought I was a pretty good coach. But, what I have learned at my age from them is fantastic. I wish this was around back then. Feel like I let all my kids down after I wee what we all missed. I coached for 30 years and took a lot of years off. My grand kids grew up and I started coaching again. I feel they the knowledge I got from breakthrough has been a tremendous help.
Tks
Steve
This review is helpful

Bruce Anderson from Marion, IA
5/13/2020 at 4:47 PM
This program is excellent. Has helped my granddaughters really work on and has expanded their shooting footwork and ballhandling shooting off the dribble. Terrific in helping building consistent fundamentals of shooting.
This review is helpful

Eric
5/12/2020 at 11:28 PM
I’ve been a youth coach for the last 10 years
This is one of the best shooting programs that I have seen
Great systematic approach to teaching shooting
This review is helpful