The Offensive and Defensive System Behind 1,040 Wins for This Hall of Fame Coach

Do you ever wonder what the greatest coaches in the world do behind the scenes in their own programs?

Now for the first time, we're going to take you inside one Hall of Fame coach's complete system...

So you can see the key strategies and habits he attributes to his team's success...

All designed for you to easily borrow from his system and apply to your own to reach that next level of leadership and performance: 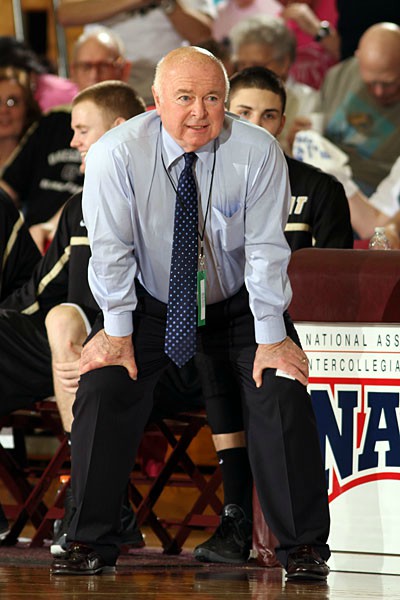 As head men's basketball coach at Oregon Institute of Technology for 45 years, Coach Miles' resume speaks for itself:

He also resides in the National Collegiate Basketball Hall of Fame alongside iconic coaches like Dean Smith, Coach K and Roy Williams.

Only the highest echelon of coaches have been able to maintain a standard of excellence for decades on end...

As players, skills sets, positions, and society evolved over 45 years, one constant remained:

Coach Miles' standard of excellence and his ability to consistently get the most out of the talent on his team - year after year.

So it's our great pleasure to pull back the curtain on Coach Miles' success...

And give you the chance to soak up his wisdom and incorporate it into your own program.

Along those lines, no piece of Coach Miles' system is more fundamental to his success than his...

This simple yet powerful statistical formula tells you each player's on-court effectiveness on a scale from 0-2...

And gives you "X-Ray" vision as a coach to see hidden opportunities and...

When you pair the VPS with Coach Miles' simple coaching tactics and practice drills, you create a competitive edge on other coaches who are overly-dependent on gut instinct or complex and confusing analytics.

Why Does the Value Point System Work So Well?

So why exactly has the Value Point System stood the test of time - being used with hundreds of different players across multiple decades?

What makes it a key force behind Coach Miles' remarkable success?

By using a quantifiable (numbers-based) evaluation that emphasizes ALL key aspects of player performance, the VPS:

You need look no further than a volume shooter who may score 15+ ppg, but shoots a low percentage, turns the ball over at a high rate and daydreams on defense.

Does that player add more value than a role player who takes good shots and does the little things on both sides of the court?

Who REALLY deserves that playing time?

VPS gives you a simple way to decide...

As well as a clear tool for communicating to your volume shooter exactly what they need to do to EARN minutes...

And a short feedback loop to show them if (and how much) they're moving in the right direction.

Of course, there's more to Coach Miles' Hall of Fame career than the VPS - even if it is a foundation of his success.

Ask him and he'll tell you about the other pillars of his program:

Each of these pieces contribute to the whole of 1,000+ career wins...

And each includes details that you can borrow and mold for use in your own program.

It took Coach Miles 45 years to amass this wisdom and clarity, but now you can access his behind-the-scenes system all in one place... 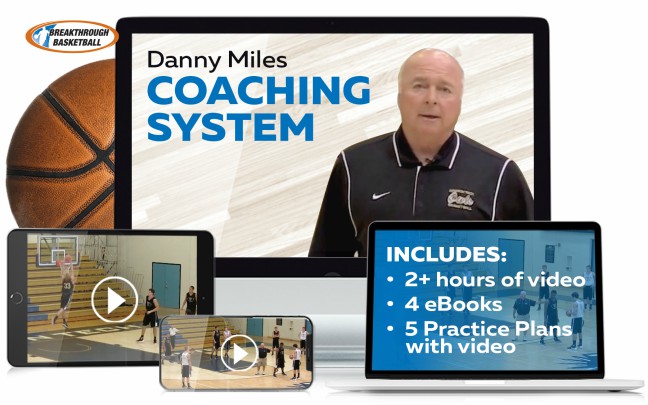 The Danny Miles Value Point Coaching System is an all-access look inside the coaching mind and success principles of one of the winningest coaches in college basketball history.

Take bits and pieces of his system or use his entire approach in your program - whatever makes sense for you.

But regardless of how you implement...

You will have the tools to win more games and get more out of your players.

Who this program is for:

What High-Level Coaches are Saying About Danny Miles

I have known Danny Miles for over 35 years. Danny coached NAIA basketball in Oregon when I started my coaching career in Montana. Danny coached the game at a high level and would’ve been a successful coach anywhere at any level. His teams were well coached, disciplined and tough. Coaching against Danny at such a young age helped mold me as a coach. I got to see firsthand what a great coach looked like from every aspect.

Danny Miles is one of the best coaches I have had the opportunity to coach against. When I first started coaching in the CCC Oregon Tech was the program we were all trying to emulate. His teams were always fundamentally sound. The VPS and offensive systems he used were a huge part of that. Regardless of level Danny Miles is one of the greatest basketball coaches we have ever seen.

If you want to grow as a coach you should study and learn from the best. My friend and mentor Red Auerbach once told me that you are never too young or old to learn, and that "The only time you lose is when you don’t learn." My hope is that you will take advantage of the opportunity to become the very best coach that you can be and learn from Coach Danny Miles; a great person who happens to be one of the top five winningest college basketball coaches of all time.

I knew of Danny Miles' Value Point System before the release of this DVD, so I was able to get a headstart on everybody else. Since I started using the VPS, my winning percentage has increased as a coach and i believe was a major factor in my teams success in reaching last year's championship game. It is a very effective system, and one that allows me to get the right combination of guys on the court.

Ben Mugford from Machias, ME says:

This product is a great way of scouting teams. It's a quick easy way of showing your own weaknesses as well as strengths, as well with the competitions.

If you want your players to get better I suggest you get the VPS.
The numbers don't lie...players understand low numbers lose to high numbers. This has helped them pay attention to detail.

Coach Miles' Value Point System is a stats evaluator on steroids! A huge wake up call system for me and my Son. We love the VPS. Every baller knows the basice skill sets and disciplines you need, to be a complete baller. The VPS puts these into measurable meaning and clearly exposes your REAL performance on the court beyond making baskets and "looking good". A real sobering eye opener.

The point value system really shows athletes how they stack up against each other and what qualities they need to possess to become better players and earn a higher point value. It is very motivating to the athletes and gives me, the coach, another tool to use to explain playing time and reward those athletes who are unselfish and play well offensively and defensively.

As a 12 year High School basketball official, and new youth basketball coach, I was enthused to purchase this product created by one of the nations finest head coaches. I found the method and material to be awesome. I am coaching younger kids this year and the basics are the main focus, but I was able to modify the drills and integrate the philosophy in just 2 practices. My kids can barely hit the rim at times, but they are already responding to the coaching changes and the idea of value points. Can't wait to move up to higher levels and use this tool to win games. Great Job. Varsity Coaches need to watch this DVD and read the book!

I enjoyed the Value Point system considerably. It can be used at any level of play. The thing that sets it apart from other systems it gives the overall view of a player. I was on a blog the other day and a coach said he didnt know how much he missed his point guard until he was out with an injury. (9ppg) (6asg), (5rpg), and (4spg). Those stats are not overwhelming, but he does a little bit of it all. If he would have had the Dannt Miles Value system he would have understood his players performance before the injury. It puts highlights on the "little things" in basketball. I have always heard and said that the little things win the game. Coach Miles system highlights the little things and gives you a more accurate performance of a player, or a team. I reccomend it to everyone.

The VPS is a great tool and a key reason to our on court success. The system has changed my perspective on what it takes to win and knowing what players i can use in different situations.

These videos and eBooks are packed with Hall of Fame coaching insight earned after 40+ years on the sideline.

So we're certain this System will be a valuable addition to your coaching library and give you new strategies to implement in your program.

But if for ANY reason you don't feel like this is the right program for you, we will happily refund 100% of your purchase price.

No questions. No hassles. No worries.

Here's Everything You're Getting:

Great coaches know that X's and O's will only take you so far.

If you really want to build a perennially successful program players and coaches are proud to be a part of, then you need those extra intangibles...

This is a rare chance to pull back the curtain on the genius behind a 1,000+ Hall-of-Fame coach...

But maybe more importantly, you'll understand how to predictably elevate player performance and build a winning culture that stands the test of time.

So click the "Join Now" button above to get your copy of the Danny Miles Coaching System and we look forward to hearing about your future success!