In this video set, you learn Keith Haske's uptempo defensive and offensive system that has helped him win over 650 games, reach the state championship 5 times with both boys and girls, and compile a 239-78 record (.753 win percentage) in his last 13 seasons.

It's a fun and fast-paced uptempo system that players love and wins games!

Here are a few benefits of the Keith Haske Uptempo System...

Coach Haske believes their system develops depth. After running the system for more than 15 years at 3 different schools, he always has deep teams. He believes that is because of "the system" and the way they practice.

2) Fun for Coaches, Players and Fans

Players and fans love the uptempo pace and intensity. The system draws large crowds and excitement. Lots of kids get to play. And parents rarely complain.

It's an intense and exciting style of play!

3) Unique - Difficult for Opponents to Prepare for

The system is unique. You don't see a lot of other teams run this and it requires other teams to use different preparation against you.

One of the biggest benefits to the pressure defense is that it looks different to the opponent each time down the floor, yet it's simple. The rules allow for this.

The constant tempo and pressure wears teams down. It's difficult for any team (good or bad) to stay disciplined for the entire game.

Keith Haske's teams are usually their best toward the end of game. They almost always make a big run in the 2nd half.

5) Flexible - Works Regardless of Your Personnel

As long as you have players that will work hard... you can succeed with this system.

You don't need size or a great amount of skill. Of course those things help! But it's a flexible system that works with small teams, tall teams, or almost any talent level.

The rules makes the system easy to learn. Middle school teams can easily learn the system and succeed.

Bottom line is the system gets results. It has worked with boys and girls and at 3 different schools.

It works against bad teams and good teams. Good teams might not turn it over as much, but they take quick shots and go faster than they want to. As a result, their shooting percentage suffers. Opponents get gassed and wear down.

It's fun, exciting, players love it, practices are fun, and it wins games! What more could you want?

Here's What You'll Get in this Video & eBook Package 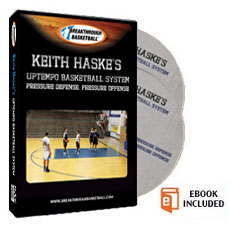 Coach Haske gives you an overview of his system, the philosophy behind it, and why it has worked so well for him.

The uptempo system starts with a full court pressure defense. It's a hybrid defense combining both zone and man-to-man principles.

The press is based on "rules" that make it easy to learn and allow the defense to look different each time down the court...

This is one of the biggest benefits of the press -- opponents have trouble preparing and handling the pressure because it looks different each time down the court.

Most presses are somewhat predictable and players learn where traps will occur and what will happen. The Haske press is very unpredictable, very difficult to prepare for, and difficult to play against.

A few things you'll learn in this chapter include:

Chapter 3 - 5 on 5 and Press Alignment Rules

Now that basic rules and concepts have been taught, coach Haske shows the press in a full court 5 on 5 setting.

You learn the initial press alignments and responsibilities when the ball is entered. You'll learn how to defend all types of press break entries (including 4 across, 3 up, 2 up, and 1 up).

There are 3 different presses -- blue, white, and gold. They are very simple to learn because they all follow the same rules -- but the initial set up looks different. This makes your opponent think you have 3 completely different presses and also allows you to dictate the tempo.

By changing from blue, white, and gold press during the game.... you can dictate the tempo, keep the offense guessing, and cause more turnovers.

In this chapter, you'll learn how to handle various situations when pressing...

You'll learn how to handle almost any situation and turn it into your advantage.

The press falls back into half court man defense -- however the pressure and tempo remains high!

Coach Haske wants to maintain the pressure and tempo at all times. So they utilize sound man to man principles while pressuring and occasionally trapping in the half court. They try to eliminate ball reversals and force the opponent out of their comfort zone while maintaining an uptempo pace.

In this chapter, Coach Haske goes over his key teaching points and philosophy for half court man to man defense.

In this chapter, Coach Haske reviews the rotations and key elements to the press on the whiteboard.

In this chapter, Coach Haske answers a few common questions about the press.

On the offensive end, Coach Haske maintains the uptempo pressure. They are in a constant attack mentality while taking good shots and playing fundamentally sound.

They use a unique fast break and half court system that gives them good looks at the basket early in the possession.

One of the best things about the system is that it develops depth and players lacking skill can contribute. As long as players are willing to work hard, they can contribute to the team.

In this chapter, you will learn:

In this chapter, you'll learn 7 quick hitters you can run out of your half court or transition offense.

Coach Haske runs a simple motion offense that is based on good spacing, ball movement, and getting the ball inside via the post or dribble drive.

Learn how Coach Haske attacks all types of zones including the 2-3, 1-2-2, and 1-3-1. He demonstrates their zone offense and gives you a few quick hitters for attacking the zone.

For your convenience, we have documented the rules, responsibilities, philosophy and drills included in the videos. We also documented a step-by-step process for you to implement the defense.

Some of Coach Haske's accomplishments include:

Who Should Consider the System?

Middle school, high school, and college coaches can take something from this system. A high level travel team could also use this system.

Coach Haske has successfully implemented the system at the middle school and high school level for both boys and girls.

In fact, the first time Keith Haske coached a girls team, he implemented the system with the freshman, JV, and varsity. The program went 60-0 for the year!!! They didn't lose a game until reaching the state championship where they lost to a very talented team out of Detroit.

Keith Haske's Uptempo System is backed by our 60-day unconditional money back guarantee.

No questions asked.  No hassle. No worries.