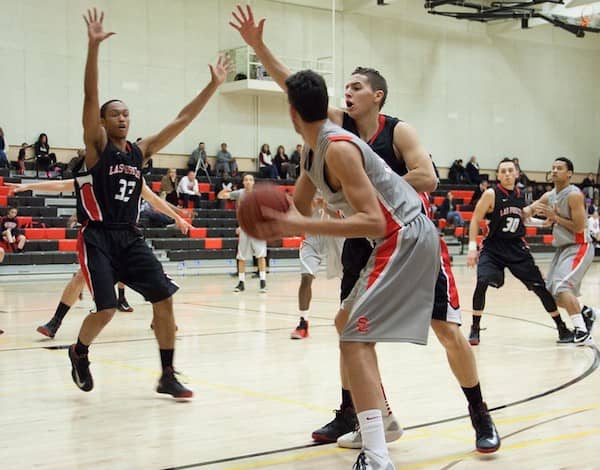 Photo from: The Skyline View

Over a decade ago, I heard a coach by the name of Lance Randall say that when facing a 1-3-1 half court trap, he taught his high school team to use a jump pass.

I know what you're thinking! So just hold on with me for a second...

For those of you who don't know Coach Randall, he has won multiple high school state championships, a NCAA Division III National Championship, and currently coaches the NCAA Division II level where he's led multiple teams to the national tournament.

When you have that success at multiple places at different levels, you're doing something right!

When Randall's teams faced a local powerhouse high school team in Wisconsin, they struggled against their trapping zone defense.

So Randall decided to implement the jump pass after watching some film of a Russian Olympic team that consistently utilized it with great success.

After Randall's team implemented the jump pass, they beat the same team twice by 25+ points. And prior to subbing the rotation players out near the end of the game, they only had 2 turnovers!

Here is why the jump pass worked so well:

If you stay on the ground, to get the ball over the trapping defenders, you typically have to throw a lob pass with more arc and less speed on the pass.

This allows the defense to recover on the pass. And it also allows defenders more time to steal and deflect passes.

This lets the defense constantly trap you 2v1 without creating an offensive advantage. That's not a recipe for success.

However, when you jump to make a pass, you can throw the ball quicker and on a straighter line. It creates more 2v1 and 3v2 advantages away from the ball.

That's why Coach Randall's team had so much success after implementing the jump pass.

Now, keep in mind... there is a big difference between:

Jumping to MAKE a pass and...

Jumping to FIND a pass.

You don't jump to find an open teammate. This is where the big problems occur.

However, if you jump to pass to an open teammate, this is where you can create more scoring opportunities.

Also, you don't want to lean back when jumping. You want to be balanced and strong with the jump.

You also want to utilize breakdown drills in practice prior to implementing in a game. Don't just teach your players about the jump pass and go out the next game and start doing it. Like any other skill, you need to practice and become proficient in the skill.

Now, if you're a youth coach, you probably don't want to teach this.

However, at the high school and college levels, I could see it as a useful strategy to punish trapping zone defenses.

Let me know what you think!

What do you think? Do you have other ideas? Comment below!