Now this article isn't solely about our teaching philosophy, it's about using appropriate drills once you have developed the skill and confidence in your players. Once this has occurred, I like to introduce 1v1 competitive drills. I enjoy these drills because they simulate game-like situations, get high amount of game-like repetitions in a short amount of time compared to 3v3, 4v4, and 5v5, and the players enjoy them.

Here are two great 1v1 competitive drills that I use to improve perimeter play. Another great bonus is that they also improve first step speed, running speed, quickness, and agility. 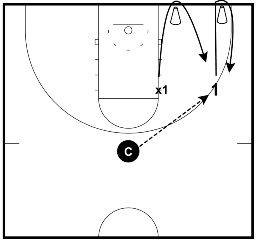 This simulates an action where the player cuts from the corner to the wing whether it's via a screen or a cut. Typically, you will see a forward pivot or sometimes a drop step utilized when the defender over-commits. You can always adjust the cones based on how you want the player to approach the wing or the pass based on your offense or actions in your plays.

On go, both players sprint around their selected cones. As the offense approaches the wing, coach passes the ball.

Offense looks to score. Only 1 shot is attempted and next group goes. 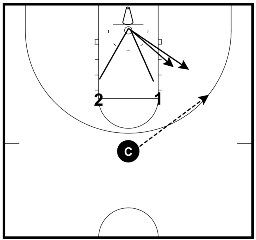 This drill simulates a game-like action where the player cuts from the basket area to the wing. This could be done via a l-cut, a v-cut, or a down screen. During this drill, you will see the players typically utilize a reverse pivot or drop step. Some players who prefer the front pivot will also do that.

Offense looks to score. Only 1 shot is attempted and next group goes.
Points of Emphasis

Think Shot - If you are within your shooting range, if you are open, and you are under control, shoot it.

Sprint to Ball - Once the player rounds the cone, they need to sprint to the basketball or spot. This will simulate the game situation with game-like speed.

Counter - If the defense covers your shot, instantly go to your counter.

Limit Dribbles - So players learn how to properly use the dribble, we will set a 2 or 3 dribble limit.