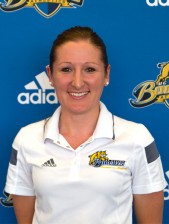 Sarah Hopkins-Chery enters her fifth season as the head coach for the University of California, Merced women's basketball team. She begins the 2019-20 campaign with an all-time coaching record of 79-45, 38-12 in California Pacific Conference play.

Hopkins-Chery’s 79 wins are good for second among any other active head coach in the conference.

She first earned international playing experience with the Under 16 and Under 20 England teams and eventually England’s senior women’s nation team in 2002.

Hopkins-Chery attended and played basketball at Jefferson College where she was an NJCAA Academic All-American Scholar-Athlete in 2005, All-Region Academic Team member in 2005 and a two-time MCCAC Academic All-Conference honoree.  Additionally, the Vikings were conference champions in 2004 and 2005 while she was a part of the program.

After two years at Jefferson she transferred to Park University where she became a standout on the women’s basketball team.  As a player at Park she helped lead a Pirates squad to the programs first-ever appearance in the NAIA National Tournament in 2005-06 after winning a conference title in the Association of Independent Institutions (AII).  Hopkins-Chery was also honored as an AII-Academic All-Conference member and an NAIA All-American Scholar-Athlete in 2006 (the first of three times she received this honor).