Who is Fatih Akser? 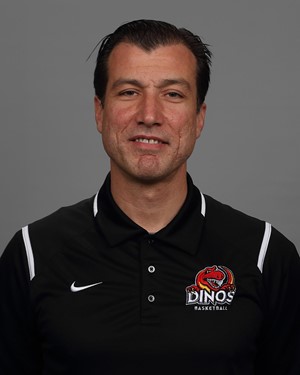 Coach Fatih joined the University of Calgary Dinos in 2019 from the University of Regina where he spent three seasons with the Cougars, helping them capture a Canada West title, two silver medals, and three trips to the U SPORTS Final 8. Coach Fatih brings a tremendous wealth of knowledge to the position with high-level experience across the board. He played professional basketball in Turkey and Cyprus before he started his first coaching job at Fenerbahce Ulker Professional Basketball Club in Turkey. Since 2004, he has coached almost every level in Canada from CCAA to U SPORTS and club basketball with the Ontario Basketball, Basketball Saskatchewan to stints with provincial and national teams.
Coach Fatih completed the National Coaching Institute's (NCI Ontario) "Advanced Coaching Diploma" program in Toronto and is certified as a NCCP Level 4 basketball coach. He is also graduated from the FIBA Europe Coaching Certification program and is also a registered FIBA certified coach. He is a trained NCCP learning facilitator and learning evaluator for Canada Basketball.
For the Elite Youth Development programs, he served as a head coach of Ontario Basketball’s U17 team which won three gold medals and a silver, including winning the 2013 Canada Summer Games in Quebec. In addition to that, he also worked as a head coach at Performance Enhancement Program (PEP), Centre for Performance (CP) in Toronto and Canada Basketball’s Targeted Athlete Strategy (TAS) youth development programs from 2006 to 2013.