Who is Eddie Robinson? 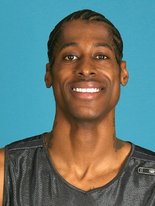 A native of Flint, Michigan known for his freakish athleticism, ability to score the basketball and jaw dropping vertical, Eddie Robinson, better known in basketball circles as “E-Rob”, began his collegiate career at Trinity Valley in Athens, Texas. After his freshman year, Robinson transferred to Brown Mackie College in Salina, Kansas, where he averaged 22.7 points per game, earning him first team All-American. Robinson would complete his collegiate career at the University of Central Oklahoma where he totaled 28 points and 9.5 rebounds per game. In 2017, Robinson was inducted into the NJCAA Hall of Fame.

Upon completion of his collegiate career, Robinson caught the attention of the NBA’s Charlotte Hornets where he played from 1999-2001. After an impressive playoff performance with the Hornets in 2001, Robinson inked a five-year $32 million contract with the Chicago Bulls.

Since his NBA career, Robinson’s love of the game has kept him active in the basketball community, suiting up for the NBA’s G League, the National Basketball League of Canada, and most recently, Ice Cube’s Big3 league which features former NBA stars. In addition to playing, Robinson has operated an elite basketball training business for several years, with his young clients across North America experiencing unprecedented results. Robinson has also served as a coach at many high school developmental camps and has been active in several charity initiatives for underprivileged children and victims of bullying.

Robinson lives in Halifax, Nova Scotia with his wife Jillian and their infant son Louie, and often travels to his second home in Houston, Texas to spend time with his other three children, Jaalen, Santana and Giselle.