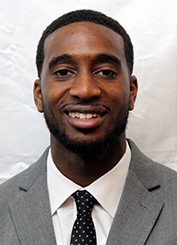 Bryson Davis-Johnson is in this third season with the UIndy men’s basketball team.  His responsibilities for the Greyhounds include assisting the coaching staff with on-court activities, on-campus recruiting, advanced scouting and planning for travel and meals.

In his second year as a member of the UIndy coaching staff, Davis-Johnson guided five all-conference players, including all-defensive member Ajay Lawton. Along with second-team members Eric Davidson, Jesse Kempson, and Jimmy King, Davis-Johnson also mentored freshman Tate Hall to the conference's award for top rookie. The Greyhounds went 16-12 on the season, but a 12-6 record earned the team the five-seed in the conference tournament, which led the team to the second before succumbing to Wisconsin-Parkside.


Davis-Johnson played one year of Division III basketball at Millikin University in Decatur, Illinois (2009-10). He began his coaching career as a volunteer assistant at Charleston High School in Charleston, Ill., while still in undergrad.  During his student teaching he was an assistant coach at Danville High School in Danville, Illinois. He taught physical education at the elementary and middle school levels as well as coached high school basketball at The High School of St. Thomas More in Champaign, Ill., for two years following graduation.

A native of Champaign, Davis-Johnson played four years at Centennial High School. As a high school senior, Davis-Johnson was the co-captain of a Centennial team that went on to win the IHSA class 3A state championship (’09) and was named to the News-Gazette all-area honorable mention list.