Camps > Pennsylvania > Scranton > May2021ScrantonShootingCamp
DATES:May 8 - May 9, 2021
AGE GROUP:Grade 5 to 10, Boys and Girls
COST: $195
This specialized 2-day camp will give you the drills and instruction you need to become a top-flight shooter who stands out from the competition. Go into season ready to increase your shooting percentage and range with better mechanics and more confidence in your shot. These are the secrets perfected by the world’s greatest shooters, and now they’re yours as part of the 2-day intensive Shooting & Offensive Skills Camp. 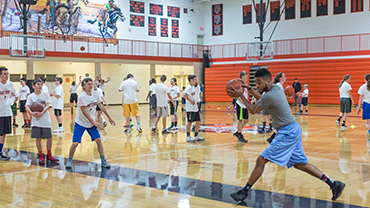 What will players get out of the camp?

We use a “Progressions”-based approach to ensure all players establish a strong foundation before moving into more complex drills. This allows each player to move forward at the appropriate speed for their age and skill level.

This is the first step in becoming a great shooter. Some players will progress through this stage quickly, while others will need to spend a bit more time to correct some bad habits. You will also learn:

Shooting Off of the Catch Like Steph Curry, Klay Thompson and Kevin Durant

After we have built a great shooting foundation, we will progress to shooting off of the catch. You will learn:

Shooting Off of the Dribble Like Russell Westbrook & Kyrie Irving

As the levels go up, it's very important to add a pull up jump shot off of the dribble. This gives you the ability to score as defenders rush out to defend the initial shot. You will learn:

Here’s What Attendees Have To Say:

“Watching my son’s confidence increase as he began shooting from pre-camp to post-camp was amazing to watch. He learned great skills to practice before moving into JV ball” - Mark P., Lansing, MI “Thank you for sparking the fire in my kids to not only be great players, but also great individuals and team players. Coach was amazing and we appreciate you finding coaches like him. I’ve never seen my son smile so much while doing basketball” - Carrie H., San Angelo, TX “My daughter was really nervous about this camp because she wasn’t sure if…she’d be as good as everyone else. She came home so tired every day but was so excited about what she learned. She’s excited to keep practicing. Thank you for an awesome experience.” - Kim B., Knoxville, TN “Amazing camp! Love the positivity and the drills were great. Coach gave them great talks about being good people, too! We will be back!” - Kerri D., Lenexa, KS

We’re committed to giving you the most personal attention, reps and opportunity for improvement during this camp. For that reason, spots are very limited. If you’re ready to take your offensive game to the next level, we encourage you to reserve your spot while they’re still available.

Once you enter your initial registration information at the bottom of the page, you’ll be taken to the payment page to complete the sign up process. Your spot will be immediately reserved once payment is made. Then check your email in 10-15 minutes for a Welcome Message with all the information you need to set your child up for success at camp.

Every player has their own unique motivations and goals for attending a Breakthrough camp, including: What are YOUR biggest motivations? When you come to camp focused on what you want to achieve, you put yourself in the best position to succeed. No matter what your goals are, the Shooting and Offensive Skills Camp can help you achieve them.
Coach Profile 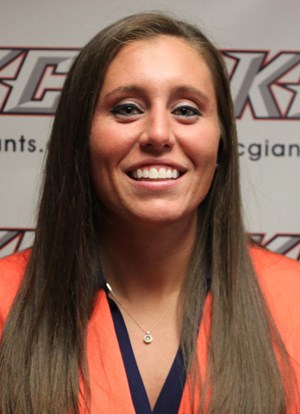 Kristina Danella is currently in her third season as the Head Women’s Basketball Coach at Keystone College in La Plume, Pennsylvania. Danella’s career coaching record is 125-73 after seven active seasons. Danella is also in charge of Game Day Management at Keystone College.
Danella came to Keystone after coaching at Division II San Francisco State in 2017-18. Prior to leading the Gators, Danella was the head coach at Division II Caldwell in New Jersey from 2014-17, going 65-26 with a 48-9 Central Atlantic Collegiate Conference mark
Additionally at Caldwell, Danella served as the Associate Director of Athletics and Senior Woman Administrator, where she served on the Gender and Equity Committee for the Central Atlanta Athletic Conference, and oversaw Caldwell's Student-Athlete Advisory Committee, helping fundraise for charities such as Make-A-Wish.
Danella serves as the High School Director and Head Coach of the Jersey Cardinals AAU program.
The Manalapan, N.J. native starred at Red Bank Catholic High School, graduating as the school's all-time leading scorer and rebounder with 1,773 points and 1,156 rebounds. A three-time All-State First Team selection, she was a two-time Shore Conference Player of the Year and the 2007 Asbury Park Press Player of the Year.

The camp is for boys and girls from 5th grade to 10th grade.

Players will be grouped based on grade and gender to start during the individual skill work drills.

$195
Get Notified About New Camps in Pennsylvania
Observing Coaches

Coaches can attend for free by working the camp. Email us if you're interested in helping with the camp.
Otherwise there is a $97 fee to attend as an "observing coach". You will get to learn new drills and techniques from Kristina Danella, just like all the players and other coaches in attendance. Visit this link to reserve your spot as an observing coach. If you have any questions, don't hesitate to email us or request a phone call.
© Copyright 2021 Breakthrough Basketball, LLC.
Terms & Conditions Privacy Policy
Get 3 Free eBooks Now!
Simply subscribe to our monthly newsletter and receive:
72 Basketball Drills & Coaching Tips - 136 page eBook
21 Basketball Tips & Tricks for Players - 20 page eBook
32 Winning Basketball Plays - 96 page eBook
Plus, you'll receive new drills, plays, scoring tips and coaching strategies delivered to your inbox each month.
Over 200,000 players, coaches and parents subscribed
Get 3 FREE eBooks Now!
Receive 72 drills, 32 plays & 7 shooting workouts!