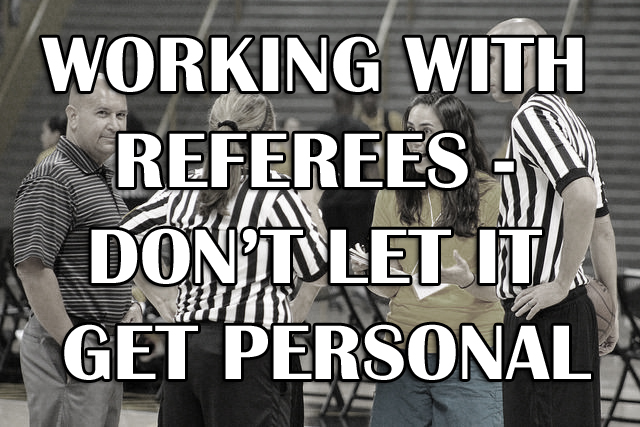 
Working With Referees - Don't Let It Get Personal

He called me a what? It’s a question I asked myself many times during the five years I worked as a high school and college basketball referee. It’s also a question I’m sure some officials pondered while I worked the sidelines as my son’s youth basketball coach. Having been on both sides of the conversation, I now realize when the criticism that coaches direct at officials becomes personal, problems ensue. Let me be clear what I mean by personal. Instead of saying a call was horrible, the more damaging comment focuses directly on the official: you are horrible. As a referee, I was more tolerant of the former, because to be honest, some of the calls I made were horrible. This may surprise some, but let there be no mystery here. When an erroneous call is made, the referee immediately knows it. There were times I even acknowledged to the coach that I made a mistake. As an official, it is best to admit when you kicked a call and move onto the next play. Most coaches respect that type of honesty and transparency because it validates what they saw.

However, when a coach goes on the offensive attack and his comments get personal, the line is crossed and a technical foul needs to be called. There should never be any exceptions to this rule. I don’t care if the coach whispers these words and the referee is the only one to hear them. I don’t care if it’s a high stakes game late in the fourth quarter. There is a certain level of self-respect that we must all maintain and if a coach is going to utter such insults, there has to be a consequence. A technical foul needs to be the response. Instead of engaging in a verbal wrestling match with the coach, leading nowhere but to a conversation with your supervisor, officials should remember that silence cannot be quoted. Simply administer the penalty and walk away. Both coaches and officials need to stop attaching any additional weight to a technical foul so that the reaction is not overblown. Officials and coaches need to recognize that a technical foul is a warning; a reminder that if the unsportsmanlike behavior persists, an ejection will follow. Most coaches will admit that the primary responsibility of a referee is to maintain control of the game. By that, they and I mean that when physical play gets out of hand, officials reign it in and blow the whistle. The other part of this responsibility is to monitor the emotions of both players and coaches so that the integrity of the game is not compromised.

Communication between coaches, players, and officials is a part of the game that deserves our collective attention. Officials are more than just the “Stripes” or “Zebra” that we have attached to them. They are men and women who deserve to be treated with a level of respect that is consistent with how the game should be played. So, the next time you criticize an official, do it in a way that focuses on the play in question, not on the character of another human being.

Please leave your comments, suggestions, and questions below...