In hopes of giving you some ideas and possibly helping your team in some way, I’m sharing what we did with our sophomore (10th grade) boys basketball team this year.  This includes our offense, defense, drills, plays, and so on.

For the 2015/16 season I coached the Marion sophomore boys basketball team.  It’s a 3A school in Marion, Iowa.  The high school consists of around 620 students.

Due to injury, players not going out, and players moving up… we had an unusually small roster.  We only had 7 sophomores to start the season.  After a week into the season we moved up 3 freshman.  This gave us enough to compete yet we rarely had enough to play 5v5 in practice.  We made it work.

Since this was a completely new team I didn’t have high expectations. In the back of my mind I would have been happy if we won half of our games. So going on an 18 game streak was a nice surprise!

The season was very successful in my opinion.  We won 19 games but more importantly all the players improved, had fun, got along, played extremely well together, and I hope they all learned some good life lessons.

No one of the team averaged more than 8 points per game —  and 7 different players averaged 4 or more points!!  That is pretty incredible.  It was a very balanced attack, sharing of the ball, and lots of teamwork.  Probably the most balanced team I have ever coached.

It made this season a lot of fun! 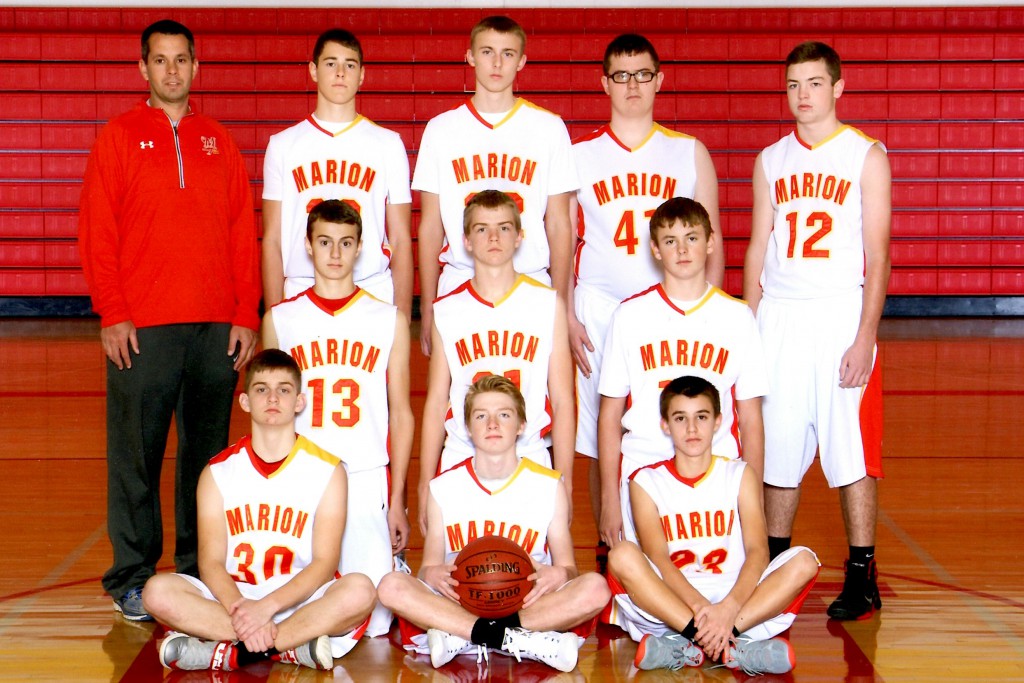 As a team we averaged:

What’s most impressive is the balanced scoring and shot distribution…

The following images show our shot chart and distribution percentages.  (To chart shots and keep stats in real time, one of our injured players used the Breakthrough Stats App during the games.) 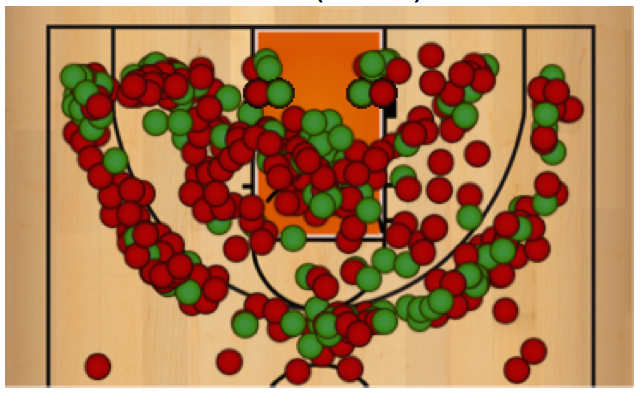 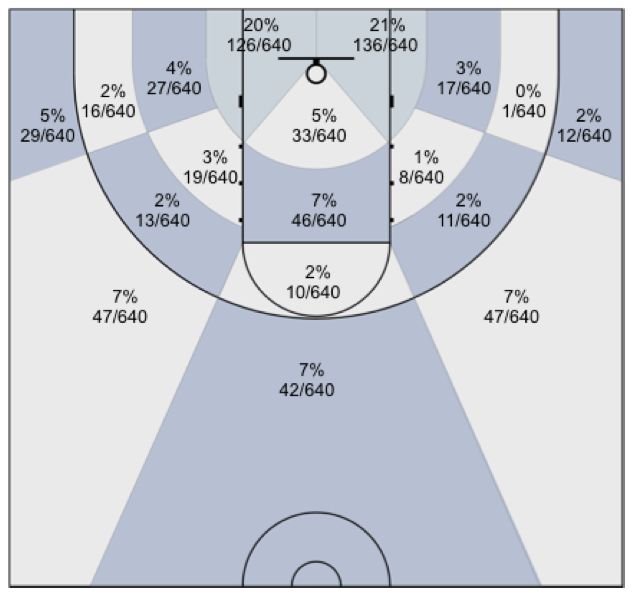 We ran when there were opportunities.  But we didn’t push real hard since with our small roster we didn’t have much depth.

I usually just gave guys a framework and objectives — then let them make decisions and figure things out.

Half Court Man to Man Offense

We ran a motion offense the entire season.  It mostly had a “5 out” look but we posted up quite a bit and we allowed quite a bit of freedom to deviate. It was all based on spacing, ball movement, and taking good shots.  Here’s the offense…

Spacing and ball movement until you get a good shot. Get all rebounds.

You can deviate from the guidelines below at any time as long as you have spacing, ball movement, take good shots, and go after all the rebounds.

I was extremely happy with our motion offense.  As sophomores it worked great for us and we still have plenty of things we can improve.  I think having plenty of room to improve is a good thing and means your offense has plenty of upside.

I loved the flexibility, effectiveness, and skill development aspects of the offense.

I could go on and on about it.  I’ll keep it brief with a couple points of interest…

Fundamental Execution and Emphasis is Key

Our motion offense was really simple.  They keys to the offense were skill development and the fundamental aspects of their spacing, cutting, screening, posting up, and so on.  We literally taught the offense in 20 minutes.  The rest of the season was spent working on both individual fundamentals and team offense fundamentals.

Technically those were the only adjustments.  But to make it effective we had to emphasize:

We never really practiced our zone offense since we didn’t have enough to go 5on5 or even have players that knew how to run zone defense.  But it was simple enough where they could just learn during the games.  It was a little rough at first but in time it worked well for us.

We had a few simple set plays that worked as both quick hitters and entries into our motion.  We didn’t run the plays very often.  And we didn’t score with them very often (maybe 20% of the time).  They usually just gave us a post up or ball reversal to kick-start our motion.

When running set (called) plays I wanted the plays to give us a great shot (lay up or post up) and also serve as an entry into our motion.  I didn’t see a reason to run plays for jump shots since we can get those any time we want with our motion.

To be honest, the only reason I added the third and fourth play was because they were new for me and I wanted to test them out. We didn’t need them.

We ran 3 BLOB plays.  They worked great.  Probably scored an average of 8 points per game just off our inbounds plays.  They were all from the box set.  We disguised the plays with a numbering system and since they all started from the same formation, opponents didn’t know what we were going to do.

We also had another play we ran against zone trying to pin the middle defender.  Otherwise we just ran the plays about and told players to find gaps.  You can find other good zone and man BLOB plays here.

Nothing fancy.  We just wanted to get the ball in.  When needed, we used these two plays:

We used this 3 across press breaker against zone presses.  Worked great for us.

If a team played man to man or even double teamed the ballhandler, we just cleared out.  We did enough 1v2 dribbling drills so it was not a problem. Our guards on occasion would beat 3 defenders in the open court.

If a team denied full court and we had trouble getting the ball in, we either used a 1 Up Press Break or Indian.  We generally saved the Indian play for the last 3-4 minutes of the game when teams were denying full court and trying to get 5 second calls.

Our opponents averaged 37 points per game.  I wish I had better stats like our opponents EFG% and PPP… but coaching 3 different teams this year, I just didn’t have time to watch film and record those stats.

Considering that we averaged 49 points, which is nothing off the charts, and our opponents averaged 37 points… I’d say our defense was pretty solid.

We followed most of the fundamentals and concepts taught in this Jim Huber Defensive DVD set.

Regarding some of the details, we chose to follow the same preferences of the varsity.  The assistant varsity coach often spent time with us running the shell drill.  This helped A LOT to develop consistent language and teaching methods throughout the program.  Some of those details included:

We really emphasized NO lay ups, keeping the ball out of the paint, moving on the flight of the ball, staying down in the defensive stance, and containing the dribble drive.

Here’s a link to the core values that we emphasized.  I tried to talk about core values in every practice and game.  Tried to use them as opportunities to teach life lessons and build character.  We probably talked about “leadership” more than anything because so many lessons steam from being a good leader.  Examples include…

Part way through the season, I really didn’t coach that much.  During time outs and half time, I would often just say…

I then might ask a couple other follow up questions.  The players would respond and have good insight.  They knew what they needed to do. Sometimes I’d even learn something from them.  Then once they gave their thoughts I might add something or just say… “Ok.  I agree.  Everybody got it?”  They would coach themselves and they could figure things out on their own.

Honestly, when you put the ego aside, they didn’t really need me all that much.  I’m just their coach.  I can’t really do anything.  They have to take all the shots, make the stops, and make the decisions on the court.  I didn’t even get to score one point this year!!!

Drills We Used the Most

Here are the drills we probably used the most during the season:

Ballhandling warm ups – a variety of stationary dribbling, on the move dribbling, etc

1v1 full court.  Self explanatory I think.  We just tried to use multiple areas to keep everyone active and working.

Post and perimeter footwork.  To get lots of reps, everyone had a ball and we usually did spin outs.  I taught same footwork shown in the Attack & Counter DVDs.

Competitive post 1v1 (after the pass and cut — or pass and screen).  Many of the full court and post 1v1 drills can he found here.

Rhythm shooting with partner.  Start 8 feet from the basket.  Take 8 shots.  Then take one step back.  Total of 40 shots.

3 and 4 player shooting (off the catch… high reps). Each player shoots and gets the rebound. As soon as Player A shoots, Player B shoots and repeats the process. Player A passes to B, B passes to C, C passes to A.  Players get an average of 14 shots per minute.

2v2, 3v3, 4v4 with various rules and emphasis — ball screen attacks, screen away, post ups, full court rugby, no dribble, etc, etc.  We used these drills quite a bit.  Many of these drills can be found here.

Free throw shooting.  Shot an absolute minimum of 20 free throws per practice.  Used all the baskets for efficient use of time.