When conducting tryouts, you want drills that allow you to efficiently evaluate players.

The key word here is “efficiently”.  You only have so much time in tryouts to evaluate players.  So you want to make good use of your time!

Tryout drills should be fairly simple yet similar to what you normally do in practice.  If drills are too complicated, you’ll waste hours of time teaching new players “how to run” the drills.  So simplicity is critical when choosing.

Drills should also accommodate varying degrees of ability and experience – since you’ll most likely get a wide variety of players at tryouts.  Some players might be inexperienced yet have a lot of potential.  You don’t want to exclude those players.

Here are the tryout 15 drills that I like to use.  They are simple and effective in regards to evaluating players for your team. 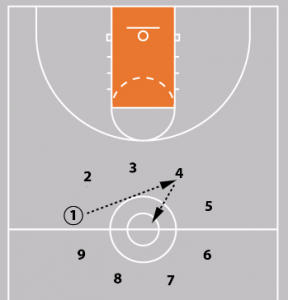 Depending on your situation, you may or may not want to use this drill.  The main purpose is for me as a coach to learn the names of the players.  However there are other benefits.  You’ll find out which players put effort into learning names of teammates and who actually uses their names in practice.  Players also get to meet new potential teammates and begin the bonding process.

To conduct the drill, players get in a circle (close enough to reach out and touch the person next to them).  Instruct players to learn the name of the person standing on their left and their right.  Then as the ball is passed, the player receiving the ball will say their own name, and the names of the players next to them.  Then they pass to a different player.  This repeats until someone knows the name of everyone there… it can be a player or a coach that recites the names of each player.

This simple drill gives you a good idea of a player’s all around dribbling skill and idea if they can make uncontested lay ups.

This is very similar to the drill above except it adds a cone dribbling aspect that can be telling.  Make sure they spread out so you can watch close.  Here’s a progression you can use:

Even though this is an evaluation, I still want players to practice the “right away” and start with form shooting.  This drill also allows you to evaluate who listens to instructions closely.

Very simple drill that gets players a high number of reps. I usually start with mid-range shots for a few minutes.  Then for older players I instruct them to move out to 3pt range.

Drill instructions:  2 balls and 3-4 players per basket.  Each player shoots and gets the rebound. As soon as Player A shoots, Player B shoots and repeats the process. Player A passes to B, B passes to C, C passes to A.  Players get an average of 14 shots per minute.

Passing drill that is very quick and easy to set up for players new to your system.

Really simple drill.  Line on top of key and line at wing.  Wing player has ball.  Pass to top, cut, and receive a pass back for lay up.  You’ll see who can pass to a player on the move and who can make lay ups.  Also preps players for basic pass and cut offense when we scrimmage at end.

This drill gives you an idea of a player’s footwork skill.   I also like to use this drill before the next drill (3 on 2 no dribble).  Because I can refer to the jump stops and pivots they are practicing now.

Gives you a good idea on who can pass the ball, pivot, and make good decisions.

Real simple.  Check the ball and play 1v1 full court trying to score.  Make sure players switch around going against different opponents.  This really tells you who can defend, who can handle the ball, and how well players move.  This is a very telling drill.

To get more reps we use both side courts.  After a possession, players go to other court (offense goes to defense) — so they are essentially rotating in a big circle.

Shows you who can handle the ball at full speed, who can finish under pressure, who can run fast, and who is a competitor.

We like to run the shell drill.  This tells us right away if a player knows anything about defensive fundamentals.  It also gives us an idea of who learns quickly and listens to instructions.

Explain our motion offense: “we just want spacing and ball movement until you get a good shot.”  Then practice a little 5 on 0 motion —  5 v 0 pass and cut, and 5 v 0 pass and screen (if time).

In some cases we have players race so we can compare their speed and agility.  You can simply have them line up in rows and then race to end of gym, run shuttles, or use agility drills like the lane agility test.

At the end of tryouts we let them play.  Self explanatory.  If we have a lot of players, we try to split them up on multiple courts.  We also keep the games short… 5 min games or first to 5 points.

You probably won’t have time to use all 15 of these drills in one practice — but hopefully this gives you some ideas on drills you can use at your next tryouts. These are all drills that have worked well for us in the past.